A Heart Bent Out Of Shape - Emylia Hall 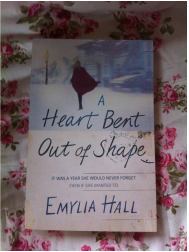 When the lovely Ben at Headline tweeted asking if any reviewers were interested in A Heart Bent Of Shape, I was quick to reply saying I would love to review this book. I loved the look of the cover and without knowing what the book was even about I was sold!!

As I have mentioned before, I am now avoiding blurbs because they can often give a lot of the book away and I was SO glad I didn’t read the blurb for this book. Once I’d finished reading, I checked out the blurb and realised that a large portion of the plot is given away!

A Heart Bent Out Of Shape follows Hadley’s journey on her year studying abroad in Lausanne. When she moves in she meets her neighbour Kristina and they form an unbreakable bond which is explored throughout the rest of the plot. Hadley also forms a bond with her lecturer, Joel Wilson, which causes tension and she also befriends an elderly, retired author who becomes her voice of reason. These four characters are the main focus of the novel and we see how each of them deals with the harsh realities of life.

I found this book a little slow paced. The main portion of drama happened near to the end which left me feeling a little cheated; I would have loved a few chapters based in the ‘future’ showing what happens to the characters over time. There was quite a lot of scene setting in the beginning which could have been replaced by some of the action earlier which would have aided the pace a lot; I didn’t feel all of the beginning of the novel was perhaps necessary, but that could just be me!

Aside from the narrative, the characters were well crafted and the writing was fabulous. Hadley was an interesting character and it was interesting to see how she developed on her journey and she seemed to learn a lot in a year. Joel was an intriguing character but at times I doubted his sincerity and found it hard to see him as a nice man, I found him a little creepy…not sure if this was what was intended! The writing was well crafted and lyrical but I am a fan of brevity so I found some of the descriptions a little long winded, but, again, that’s just me!

I am certain that this book will be widely loved and raved about, even though I had a few small issues with it, I really did enjoy the underlying story.

An emotionally evoking read about growing up, falling in love and finding yourself set in the snowy wonderland of Lausanne.