A Kiss In The Dark - Cat Clarke 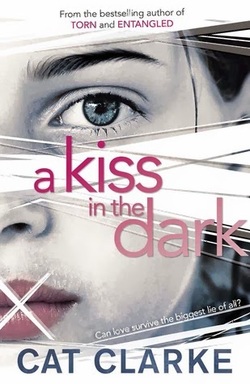 There is no way I can review this book by outlining any of the plot or themes, otherwise I will totally ruin it for you. So, here’s the blurb:

When Alex meets Kate the attraction is instant.

Alex is funny, good-looking, and a little shy – everything that Kate wants in a boyfriend.

Alex can’t help falling for Kate, who is pretty, charming and maybe just a little naive…

But one of them is hiding a secret, and as their love blossoms, it threatens to ruin not just their relationship, but their lives.

A Kiss In The Dark was a phenomenal book. From the moment I started it, I felt like I was in for a treat and very quickly I was sucker punched by a huge bombshell and I was HOOKED.

The characters in this book (the main two being Kate and Alex) developed incredibly well over the course of the book and as we found out more about their lives and their relationship, I began to see them as two complex characters who I honestly felt a connection with. The narrative is divided into two sections: one from Kate’s point of view and one from Alex’s. This aspect was really well executed and it ended with me siding with both characters, not able to hate or dislike one more than the other, feeling sorry for them both.

Clarke has such skill in writing for a YA audience and for teasing certain emotions from the reader. Without sounding clichéd, I went on a huge roller-coaster of emotions. Anger, fear, shock, hatred and love were just a handful of the emotions I felt whilst reading and I cannot imagine anyone being able to read this book without having similar emotional reactions. The descriptions of settings were spot on and whilst they were secondary to the real action that was going on, it still felt as though they had been painstakingly worked on to make them as beautiful as they were.

Once I’d put this book down I wasn’t sure how I felt. I had LOVED the book up until the last few chapters and then I felt like the ending had been resolved too easily and was a little rushed. My one wish is that there had been some kind of epilogue set a few months after the book to see what had happened to the characters; otherwise it felt like a little bit of a cop out. However, having said that, I still give this book four and a half stars and urge anyone to read it straight away. You will not be disappointed.