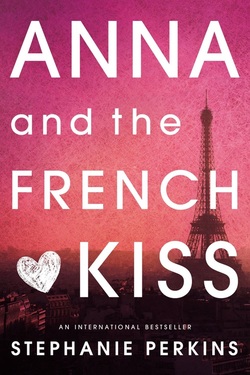 As with so many books I have read recently, I’ve had my eye on this one for ages and was so glad when I finally got the chance to sit down and read it. Stephanie Perkins has written three books which all follow the same kind of theme. The first one is Anna And The French Kiss, the second is called Lola And The Boy Next Door which I am about to start reading, and the third one which is due for release very soon is called Isla And The Happy Ever After. I love the way all of these titles sound and I can’t wait to share this review with you.

Anna is an American girl whose father seems to have more money than sense. Deciding he wants to send Anna away for a year of study in France at SOAP (School of America in Paris) without even asking Anna if this is what she wants, he books her a place. Leaving behind a budding romance and her best friend, Anna soon finds herself in a small bedroom in the middle of the Paris campus without a clue how to speak French, no idea where everything is and not a single acquaintance. Luckily, Meredith, Anna’s neighbour is friendly and invites Anna to the canteen with her and her friends. This is where Anna meets Josh, Rashimi and St Clair. St Clair is English/American/French and is one of the hottest boys around; he seems to turn heads wherever he goes.

Anna is not surprised that the very sight of St Clair makes her go weak at the knees but when he starts to talk to her, to be friendly with her and to spend time with her, Anna can’t help but wonder if she’s a little bit in love with him. The only problem is, St Clair has a girlfriend, a girlfriend who he’s had for years. Not only that, Anna’s new best friend Meredith is also madly in love with him. Can Anna find love in the most romantic city in the world or is she destined to only dream about the perfect French kiss?

If there was an award for the ‘Most Perfect YA Fiction’ then this book would almost certainly claim the top spot. This book was everything I wanted from it and more. Anna was the perfect narrator and she was so honest it was incredibly refreshing. I loved watching her, clumsily, navigate this new chapter of her life and I was so able to empathise with her in so many different ways. The introduction of St Clair was perfectly timed and from the moment I clapped eyes on him* I knew I was going to fall in love with him: and fast.

*This was one of the amazing parts of this novel. I could picture every last detail of the characters and I felt like I was there whilst everything was going on, so really, I could picture St Clair and his beautiful smile as I sat across the canteen table from him.

Anyway, enough of my gushing over fictional male characters…

Paris was a really interesting setting for the novel and whilst there wasn’t a lot of French ‘stuff’ going on because the focus was more on Anna’s story, there were some beautiful descriptions of Paris and the places that Anna visits. I felt like I was there in Paris with her.

Now the plot was predictable, there’s no doubt about that; from the second I started reading I knew where the characters would end up BUT the route that they took to get there was surprisingly and pleasantly different to the route I thought they would take.  St Clair faced a life changing problem throughout which Anna supported him stupendously and when Anna faces a kick in the teeth from those she thought were her best friends, St Clair returns the favour and helps her through it. I loved their connection and their friendship the whole way through the novel.
Perkins has such a fabulous writing style and everything was paced so perfectly that I felt compelled to read on and on and on. I couldn’t fault a single part of this novel and I honestly believe this is the best YA novel I have read in a very, very long time.

Anna’s story is one of love, first meetings, second chances and following your heart. A must read.