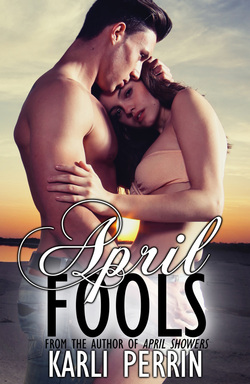 DO NOT READ THIS REVIEW IF YOU HAVE NOT READ APRIL SHOWERS AS THERE ARE SPOILERS OF THE FIRST BOOK.

April Showers was an absolute gem of a book and when I read it earlier this year I was blown away by Karli’s writing. It ended on the stonking cliff-hanger of April’s house being on fire and Lukas being trapped inside.

April Fools begins after the fire and we learn that Lukas survived (THANK GOODNESS) which leaves April in a bit of a precarious situation. She loves Issac with all her heart but she can’t help but realise Lukas nearly gave up his own life for hers. Issac is still working at the university but only has a few weeks left until he quits so April and him can finally be together without the implications that come with being lecturer and student. April is excited and can’t wait to spend the rest of her life with Issac but when someone turns up on April’s doorstep, she is worried that the perfect relationship she’s built will come tumbling down if her new visitor finds out…

I was ridiculously excited to be back in the world of these characters, so much so, as soon as the ARC arrived I started reading it and I finish it in one night! Karli has got this sequel spot on and it had every single element it needed: love, lust, sex, danger, intrigue, tension, oh, it had it ALL! I loved seeing how Issac and April’s relationship developed and it was difficult at points to not hate April for having such an AWESOME boyfriend! The introduction of a new character bought a whole new dimension and new tensions into the characters lives which was really great to see. I was a little apprehensive at first that bringing a new character into the scenario would be a silly move and Karli wouldn’t be able to execute it completely but I don’t know why I even doubted her because she did it perfectly!

The pace was fantastic the whole way through and events moved fast which was lovely as it kept the momentum up and kept me totally engaged in what I was reading. Karli’s descriptions are perfect, her tone is brilliant and the first person narrative really draws you into April’s life. I wish I could talk more about the plot because it was just breath-taking but I can’t without spoiling it! Just take it from me that the plot is AWESOME!!

Unfortunately this is the second and last book in the April series which is really sad because I don’t want to say goodbye to April and Issac so soon! I am forever hopeful that Karli might just accidentally start writing a third book one day (we can only hope!!).