Baby Be Mine - Paige Toon 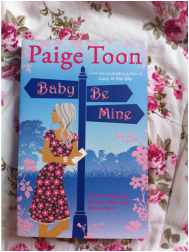 So at the end of Johnny be good we were all sitting there with our mouths wide open thinking OMG who is the father to the baby? Of course it was going to be Johnny…

As Barney grows up, the resemblance to Johnny is striking and Meg is petrified that sooner or later Christian will realise that Barney is not his. She is dreading this day because she loves Christian and she doesn’t want to break his heart.

When Christian’s mum dies, Johnny flies over from LA to help his best friend deal with her death. Meg is on edge the whole time, praying that Johnny doesn’t ask about Barney. Johnny sees a picture of Barney just as he is about to leave and suddenly realises what has happened. He gets in contact with Meg and soon Meg’s life starts to dramatically change. Johnny wants to step up and be a father but can he really change his bad boy, rock and roll ways?

I loved this book but was really sad for Christian. All along, I have preferred Christian over Johnny. To me Johnny is irresponsible and too much of a bad boy and even though he does change over the course of this book, my heart still lies with Christian!!

Meg is still the lovable character that we all fell for in Johnny be good and Johnny is just as naughty as he was when we first met him!

Paige has recently announced that there will be a short story soon in the Johnny and Meg series and then she is writing a YA series about a daughter of Johnny’s called Jessie.

I am looking forward to those immensely!