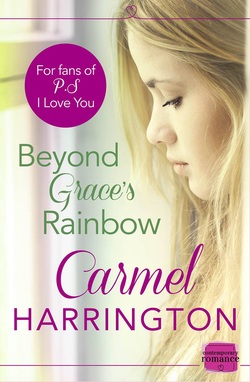 I just don’t know where to start with this book. I’m in such a trance after reading it that I can’t seem to turn my thoughts into coherent sentences.

I must say that Carmel is one of the nicest people I’ve ever met. I’ve known her for a while after she invited me to become part of her writing group called Imagine, Write, Inspire. Over the past few months, the whole group has followed her journey from being a self pubbed author to becoming a fully published author with Harper Collins. We were all SO proud of her and she continues to be one of the greatest inspirations for us all. Whilst I adore Carmel, I always aim to be unbiased in reviews, so I will review this book based on the novel alone.

Beyond Grace’s Rainbow was a book I was reluctant to start. When it was described as being good for fans of P.S I love you, I immediately thought ‘crap’; that book had me a sobbing wreck and I wasn’t sure I was ready to go on such an emotional roller coaster again. However, I was so desperate to read the novel that I was willing to put up with any kind of emotional trauma!!

BGR is a novel about love. It’s also about friendship, loss and fate.

Grace is a single mother to her gorgeous son Jack and is beyond devastated when she finds out she has leukaemia. Being the strong fighter that she is, she is determined to not let it beat her and uses all her strength to carry on living life for her son. As Grace goes on her difficult journey, she is supported by her group of friends; Tom & Gerry, Tara & Sean and Abby. Not only does Grace have their support, she also finds people from her past are slowly coming back into her life including Jack’s father and Grace’s biological mother. Grace faces the biggest battle of her life but with an eclectic cast of characters around her, she doesn’t have to fight the battle on her own.

It took me a long time to read this book for a number of reasons. I was scared to read on because I had my mind set on the ending I wanted for the characters and I didn’t want that image I had to be destroyed and it was so moving that I wanted to savour every word because I didn’t know what I’d do when I’d finished it. There are books that I pick up and can read in one afternoon and there are books I can read in a day but then there are the books that you make a conscious effort to only read a little bit at a time and I found myself doing that with Grace’s story. I have only ever done this on a number of occasions before for books such as My Sister’s Keeper. They are the kind of books you want to never end because you want to stay in the characters worlds forever. (I was gutted when I realised I’d finished this book)

The characters are all fabulous and really well developed. By the end of the novel I felt like I knew each of them personally and had all of their little characteristics in my mind. I loved how Gerry was such a brilliant friend to everyone and I wouldn’t mind someone like him to touch up my make up for me every day and to use film quotes to describe every situation! Abby was also a gem of a character and I loved how she had such a bad track record with men, she provided quite a few laughs along the way!

The star of the show though, without a doubt, was Grace. She was the most incredible character and I almost felt like I was part of her friendship group. So many times I wanted to hug her and tell her everything would be ok. Her son Jack was adorable too and I wanted to hug him also!

I loved Carmel’s writing for the most part and found it to be a really engrossing and emotionally charged read. There were a few TINY and rather pathetic problems I had with the writing but they really are petty and don’t affect the plot at all. The first was the use of the word ‘babe’. I’m not a massive fan of the word anyway but in some of the nicest moments in the novel, the word ‘babe’ was used and, for me, it really detracted from the moment. The second was that when characters were talking directly to each other, they would address the character they were talking to by their first name. For example, if Gerry was talking directly to Tom, in the conversation he would use Tom’s name. (That sounds confusing. Does that even make sense!?)  For me, it was a little odd because I personally don’t talk that in conversation (maybe I’m just downright rude!!) and I’ve never seen many real life conversations had like that so at times it felt a little unnatural and interrupted the flow of dialogue. BUT, I’m just being RIDICULOUSLY petty right now (mainly because I don’t have any other bad words to say about this novel!!)

So ignoring my pettiness, this is a book that must be read. It was such an emotionally charged read that I was pretty much ruined by the end of it. I just sat staring at my computer screen for about ten minutes after I’ve finished reading it because I didn’t know what to do.

If you pick up any book this year, make sure it is this one.

A remarkable story about a truly remarkable woman that will leave you desperate to make every last second of your life count.