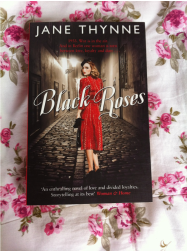 Historical fiction is not a genre I am overly familiar with. Tending to stick to contemporary novels, I've almost bypassed this whole genre for which I now regret! Historical fiction was off putting for two reasons. Firstly because my knowledge of history isn't particularly extensive and secondly because history lessons at school filled me with such boredom!
Earlier this year I took my first venture into historical fiction with Richard Madeley's debut Someday I'll Find You and I was blown away by how much I enjoyed that novel. When the wonderful Rik at Simon and schuster contacted me again and asked if Black Roses interested me, I felt I couldn't say no!
It seems that Rik only sends me the most amazing books and I am extremely grateful he bought Jane Thynne into my life!
Firstly, whilst Black Roses is fictional, it is based on real events in Berlin during the early 1930's. Luckily, it seems I must have paid attention during my history classes as a lot of my German history knowledge came flooding back to me as I read. It may be slightly difficult to follow and comprehend what is occurring if you have a limited knowledge of what was happening in Germany pre WW2. However, don't let that put you off!

Clara is an English rose who wants nothing more than to be an actress. With her late mother being half German, Clara finds herself in Berlin auditioning for a role in a new German film 'Black Roses'. Clara's time in Berlin is filled with minimal excitement until she meets the wives of the top German politicians, namely Goebbels and Goering. It is they who believe she would be the perfect model for the new German fashion for women.
Clara is thrust into the lives of many important people and it isn't until she meets Leo Quinn that things get incredibly complex. Leo, a British spy, enlists the help of Clara to find out information from the Nazi wives that could provide the British intelligence with some crucial information. But when Magda Goebbels trusts Clara with a huge secret, she faces an inner battle of loyalty and trust and must find a way to protect herself and her country and the woman she has become quite fond of.

I devoured this book. It was incredibly well researched, incredibly well paced and above all, incredibly well written. The writing was lyrical, beautiful, fluid. Reading this novel is such an effortless task and the words seem to envelope you in a sensory blanket which drags you into the heart of the action. The perfectly placed descriptions gave a real sense of the locations and characters, and on more than one occasion I found myself completely believing I was in Berlin with Clara.
Clara was the heroine who begins as a somewhat naive and sensitive soul who, be the end, has completed a transformation into a worldly woman with a more than just an acting career under her belt. To discuss the other characters would be a waste of time for I can assure you my descriptions of them do no justice to the characters Jane has so lovingly crafted.

From someone who regularly rejected historical fiction, I urge you to pick this novel up. You will love every single page and be desperate to find more of Jane's work.

Get yourself lost in 1930's Berlin, experience the feel of the streets, the smell in the air, the rain in your hair and the touch of Leo Quinn as you lose yourself in the world of Clara Vine. An exquisite masterpiece. Pure indulgence.