Can't Take My Eyes Off You - Clare Dowling 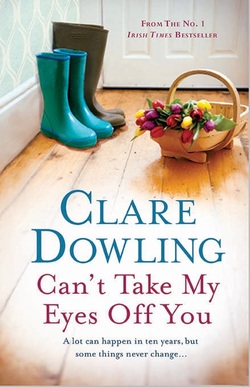 This is the first book I have read by Clare Dowling. I have a few of her other books on my bookcase but haven’t got round to reading them yet, however after this one, I am eager to read some more of her work.

I was unsure what to expect from this book as I didn’t know whether Clare classed herself as a chick-lit writer or not, so I didn’t know whether to expect a happy ending or a sad one! I would describe the genre of this book as a chick-lit thriller (my favourite!). I love chick-lit and I love thrillers so this was the PERFECT book for me! There was the traditional love story for the chick lit side of things but then an evil ex boyfriend who contributes to the thriller side.

Clara lives in London with her boyfriend Matthew but she is originally from a small town in Ireland called Castlemoy. She misses her family and the Irish way of life, so Matthew and her moved back to Ireland to start the next chapter of their lives. Her mother, sister and brother are delighted to see her again but then she bumps into her ex-boyfriend called Jason who seems to want to settle some old scores.

What follows is a plot with twists and turns as Clara goes on a mission to gain her life back and stop Jason from interfering with it anymore.

There were certain parts of this book that did genuinely send chills down my spine and I wouldn’t have liked to have read it on my own in the middle of the night! (Luckily I was reading it in full daylight eating my lunch so it was slightly less terrifying!!)

The characters are perfect. Each one had personality traits that totally suited their actions and reactions to what was going on around them. Jason was suitably unlikable and Clara and Matthew were both characters that, as a reader, you form an immediate bond with. There were some nice sub-plots going on that dealt with sensitive issues well.

The only criticism I have would be that the mother of Clara, Anita, was never called ‘mum’ or ‘mom’ it was always Anita which struck me as odd and did slightly annoy me, BUT not enough to make me put the book down.

I thoroughly enjoyed this book and got through it pretty quickly. The beginning third was pretty slow moving, but as soon as I was about halfway through, the pace drastically quickened and I couldn’t put it down.

Definitely a book to read if you like a bit of a twist on the classic chick-lit. However, if you are easily freaked out, or enjoy reading in bed then this probably isn’t for you!!