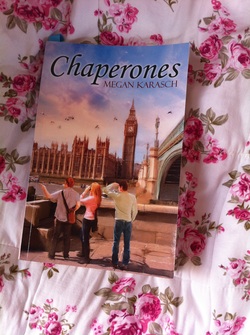 On the surface, Chaperones appears to be a book about a woman called Andrea who travels from America to England on a photography job and goes on a journey with two male friends.
Below the surface, it is a deep and detailed look at one woman's struggles to lose the fear she has about the world around her. As she grew up, Andrea was wrapped, tightly, in cotton wall and was taught to be scared of everything and everyone. Now in her mid twenties, she has yet to branch out, discover the world and make up her own mind about what she should really be scared of. Armed with a photography mission in England, she leaves her boyfriend (who has just proposed to her) and her parents to start the journey of her life. What she doesn't count on is her parents and boyfriend filtering into her adventure and trying to change the outcome. Armed with a camera, pepper spray and a phallic map of London, she starts her big quest.

I didn't hate this book at all. I thought the plot was unique, I thought the ideas behind the characters motives and behaviours were for the most part believable but I just found myself failing to click with any of them which surprised me. I am an overly anxious person and would hold my hands up straight away and say I'm a worrier and would probably behave in the same was as Andrea, yet I just didn't feel a strong connection with her. I felt the same way about her boyfriend, Brandon. I didn't like him as a character at all and over the course of the book my opinion worsened of him and I couldn't find a reason to like him again by the end. The other issue I had was the stereotypes of England and 'English people'. Now, I am happy enough to laugh at English people and their quirky behaviour (I live in England myself) but I found some of it just a bit un-funny and at times it grated on me.

However, aside from the lack of connection with the characters and a slight annoyance about the English stereotypes, I loved the message of this book and the way Andrea grew as a character. The main message of this book is as follows: why worry about something when you can't do anything to change it? Why worry about a plane crashing, when, if it did, you can't do anything about it? Etc. It was a reassuring and completely relate-able message that I took away from this book; I think a lot of people will be able to take away the same message too.

Megan's writing style is impressive; her vocabulary is above average for this kind of genre so was a more intellectual read than the average chick lit (if a book can be classed in that way!) It would be a quick read and could easily be devoured in one sitting.

If you like authors such as Erin Kaye then I predict you would enjoy this book.
A refreshing, interesting look at one woman's journey to escape from anxiety.