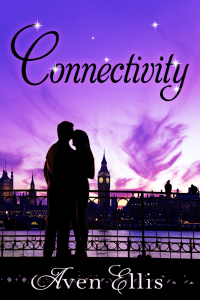 Before I start this review I have to confess that Aven is one of the nicest people I’ve ever met and I have a HUGE soft spot for her. I am not going to be biased in this review though and will review it as if it was written by someone I didn’t love!!

Connectivity is a new social networking platform run by one very suave and sophisticated English gent called William Cumberland. When he suddenly takes over the company that Mary-Kate (yes, she was named after the Olsen twin after her mum spent too much time watching Full House) works for, Mary-Kate is thrown into a whole new world. William chooses MK to be his PA and she is over the moon, what’s better than working for a sexy, British boss who also just happens to be a multimillionaire?!

MK is about to find out. Being his PA is one thing, but when MK starts to develop feelings for her boss she puts her job and feelings on the line for a man who’s only going to be in America for a few more months. Does she follow her heart or does she listen to her head?

Firstly, William is just everything you want a man to be. Sexy, powerful oh and British! (I love me a British man.) I envisaged William looking and sounding like Alex Pettyfer and that was more than enough to get me a little hot under the collar. He is dreamy and is high up on the list of my book boyfriends now!! MK was a brilliant protagonist and I completely fell in love with her straight away which made everything else throughout the plot affect me. Every time MK grinned, I grinned and when William was talking to her, I just imagined he was saying all those lovely things to me. (Ok, I’m a freak, I know.)

The plot was really sweet and although perhaps a tiny little bit predictable at times, it was no less exciting and addictive. There was a moment in one of the chapters where something happened which I wasn’t expecting and I did tweet Aven telling her I hated her because I didn’t think I could cope if what I wanted to happen didn’t happen!

The final few chapters had me in happy tears. I haven’t been so drawn into two characters’ lives in a long time and I really felt so engrossed in Will and MK’s story. I had the biggest smile on my face once I’d finished and immediately wanted to read it again!!

I managed to finish it in less than 24 hours which is pretty good going at the moment! Having so many other things to do recently has meant my reading has taken a back seat but I couldn’t stop reading this! Every time I was away from the book, I kept thinking about the characters and their stories.

This book definitely needs to make its way onto your TBR pile ASAP.

A modern day fairy-tale about the choices you have to make when you think you’ve found your prince charming.