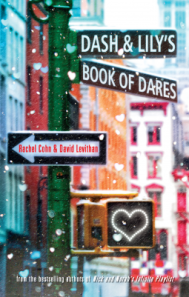 Recently I have been finding myself falling headfirst into the YA genre and am struggling to have the desire to climb back out of it! After reading multiple books this year that would be considered Young Adult titles, I’ve found that there are so many incredible authors out there with so many stories to tell. One thing I love about YA is the length of some of the books. They’re not short but they’re shorter that an adult fiction so I find I can read nearly two YA novels in the time it takes me to read one adult novel. It’s not always the case as some are longer than others, but I have found YA books are much easier to get through.

After discovering John Green, I went on to discover David Levithan and was intrigued by the blurb from Dash and Lily. I wanted to read this book for months but never got the chance to pick it up but on a spontaneous visit to the local library recently, I saw it sitting on the shelf, patiently asking me to read it!

Dash And Lily’s Book Of Dares tells the unique story of two American teenagers over the Christmas holiday period. Dash’s parents are separated and he has lied to each one, saying he’s with the other which has resulted in him spending a relaxing Christmas alone. Lily’s parents have gone away on holiday to Fiji and have left her and her older brother to look after themselves.

Whilst browsing in The Strand bookshop one lonely afternoon, Dash happens upon a red Moleskine notebook tucked between two books. He pulls the book off of the shelf and reads the cover.

I’ve left some clues for you.
If you want them, turn the page.
If you don’t, put the book back on the shelf, please.

Dash opens the book and so his and Lily’s journey begins...

Told via alternating voices and through the pages of a seemingly normal red notebook, the two teenagers discover the importance of fate and the magical power of books.

This book was written by two authors: David and Rachel. I honestly cannot think of another book I’ve read in the past that had been co-written so I was interested to see how this one worked. I was surprised to note that there was no obvious change in writing styles throughout any section of the novel and it wasn’t until I read the authors note at the back that it became clear David had written Dash’s sections and Rachel, Lily’s. The story flowed incredibly well and even though Dash and Lily had different ‘voices’, it felt like they had come from the same pen. I don’t know whether that’s what the authors wanted to achieve, but if they did then it really worked!

The plot was the only thing that stopped me from giving it the full five stars. I loved the characters, I loved the relationship between them and the banter that formed but I just found the idea a little implausible. As much as I would love to think two teenagers could write in a book, leave it in a certain place and wait for the other one to pick it up, I’m not completely sure it would work. Maybe it’s the pessimist in me but I would imagine fate would have intervened and the notebook would have been misplaced or thrown away if it was left in random places around New York. However, if you don’t focus on this aspect of the novel then it is hard to fault it.

I know that David and Rachel also wrote Nick And Norah’s Infinite Playlist and I am very keen to read that one now to see whether it is any better than Dash and Lily’s Story. I am also keen to search out some more David Levithan and Rachel Cohn books that they have written individually; I seem to have seen a few by each author dotted about the place so I am assuming they are both quite prolific!

I would certainly recommend this Christmassy read and would argue that, much like other YA novels, it can be enjoyed by an older reader very easily.

A cute, fairy-tale-esque novel about finding yourself and discovering how love can make you do some of the craziest things!