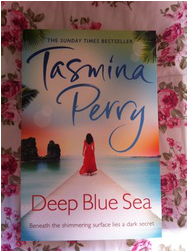 I have never read anything by Tasmina Perry before but after being sent Deep Blue Sea for review I was eager to find out what she was like. I was SO delighted by what I found within the pages of this book and I am quickly becoming a HUGE Tasmina Perry fan. Her books are the perfect genre for me. Chick lit mixed with a crime/thriller = PERFECTION.

Deep Blue Sea is a fantastic read that focuses on the lives of Diana and Rachel. They are sisters but are no longer close after Rachel did something years ago to lead her to become estranged from her family. She now leads a quiet life in Thailand with Liam her business partner. They run a dive school together and she is the happiest she has ever been. That’s until she gets a visit from Diana to say that her husband Julian has died. This is the first time the sisters have spoken in years and Rachel realises that she needs to make up for the past and help Diana in any way she can.

Diana is devastated and cannot believe that Julian has gone. She fears there was foul play involved and quickly enlists the help of Rachel’s journalism background to help her conduct their own inquest into his death. Along the way, Diana receives support from Julian’s brother Adam and begins to delve into the past, discovering things that she were rather kept hidden.

Why did Julian die? Can Rachel make it up to Diana before it’s too late?

From the first page of this novel I was gripped and the pace of this novel was consistent. I always wanted to turn the next page to find out what was going to happen. The two sisters were incredibly well written and I loved the differences between them. I felt more of an affliction for Rachel but over the course of the book Diana’s character grew on me and I really admired her by the end.

The plot was incredibly well thought out and I would have never second guessed the ending. I thought I had a clue about what had happened but I turned out to be so very wrong! There were multiple times when I inhaled loudly and held my breath trying to disbelieve what was happening. I love books that get me SO involved in the plot that every waking moment is spent trying to figure it out.

This was also a book that once finished, I wanted to read all over again. I wasn’t ready to leave the world of these characters and am gutted I read it so quickly!

If there is one book you take on holiday with you this year, make sure it is this one!!