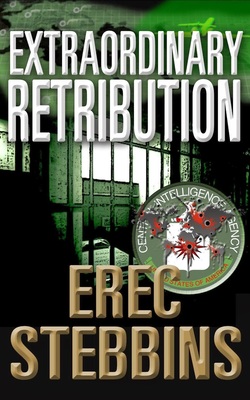 I'm super excited to be part of the blog tour for Extraordinary Retribution. Thank you Erec for also providing me with a signed proof!
I'm going to be totally honest and say that when I first saw the blurb for this book I was totally dreading it! I'm not a huge fan of government or terrorism thrillers so I was a little dubious about starting.

This novel has quite a complex plot but the main premise is as follows:
One man is seeking revenge and justice for a huge CIA cover up that ended up killing innocent Americans after 9/11 because they were thought to be terrorists.
Father Lopez, a priest, has just found his brother brutally murdered and wants to find out who could do such a thing. He joins forces with Houston (she's a rogue CIA agent) and together they try to understand why one man is so hell bent on seeking retribution. What follows is a very fast paced plot about racing to save as many people as possible before it becomes too late...

I sat down with this book fully intending to read the first few chapters and then put it down and go to sleep. However, a quarter of the book later I was still wide awake, frantically turning the pages and unaware just how late it was getting! I adore books that have such a gripping narrative that everything else in the world becomes insignificant and unimportant because all that matters is the fictional world you are lost in.

Erec has really mastered the art of 'thrilling' writing and I was constantly on tenterhooks waiting to see what would happen next. There were a fair amount of gory and graphic scenes where people were being killed of tortured so that may be a little off putting for some, but I think the narrative needed it and ergo completely relevant.

This novel had the perfect pace and a smooth transition between scene to scene which was fantastic!

The only small thing I would have wanted more of in this book was character descriptions. The main characters (Lopez & Houston) were at the forefront of everything that was going on but at times I didn't feel like I knew them as much as I would have liked. A little bit of history about both characters and a few more detailed physical descriptions would have made all the difference.  (However, I'm hoping Erec might write a sequel and we can then find out much more about them!)

I've learnt a lot from reading this novel. The main lesson is this: NEVER JUDGE A BOOK BY ITS COVER!! I'm SO glad I picked this up and gave it a go and even though it's not something I would normally go for, it is something I thoroughly enjoyed and has made me excited about what Erec will write next!

A perfectly paced thriller that grabs your attention and won't let you go until you've turned the very last page.