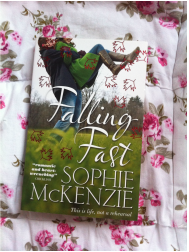 This book has been sitting on my TBR pile for a long time and I decided to pick it up and read it, after all it is a YA book and wouldn’t take me long at all.

River is a teenage girl facing every teenage girl problem; she looks too fat, she’s not pretty enough, will anyone ever love her, should she have sex?

When she auditions for the school production of Romeo And Juliet, she meets Flynn, a tall, dark and shady character who grabs her interest instantly. He isn’t like all the other boys and when she looks at him she can’t help but feel seriously attracted to him. But why does he get really angry sometimes? And why won’t he talk to River?

I would have loved this book when I was about 14/15; the questions and self confidence problems that River has were exactly how I felt. I liked how much of an honest character she was and I think a lot of young girls will be able to relate to her completely.

The plot was clever and was actually quite hard to predict which made a nice change. Things that I thought would happen didn’t and then things I didn’t think would happen did!

As I said before it is a YA book so is quick and easy to read, you can easily read in a couple of hours.

I really do like Sophie’s writing and I hope to be able to read the other books in this series in the future. I also hope she will be releasing more adult books!

A chick-lit novel for young girls who will fall in love with Flynn and want to be River.