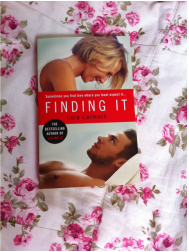 I read Cora's first novel Losing It and at the time, I wasn't that impressed by it. I couldn't connect with the characters and it felt like the plot was just yet another rehash of the same idea. However, I always give authors another chance and when I saw the cover of Finding It, I was excited to start reading. Unfortunately I didn't enjoy it as much as I hoped.

Kelsey is on a gap year, travelling around the world, trying to stay far away from her parents and find something to do with her life. It's whilst she's travelling and meeting all kinds of new people that she comes across Hunt. He's good looking, protective and she can't help but feel attracted to him. However both Kelsey and Hunt have things from their past that are stopping them from becoming committed to each other and when they go off on an adventure together, Kelsey and Hunt are left to decide if their love is strong enough to make it through the toughest of times.

Like Losing It, I found that I just couldn't invest in the characters and I didn't really care that much for them. I think the main reason for this is because I didn't know enough about them. There is such a long period in the book where nothing much happens and instead of using that time to tell us more about the characters and their motivations, it was just full of descriptions of the things they were doing and the things they were seeing, which, whilst well written, didn't, in my opinion, and a whole lot to the plot. There were only brief hints about both characters pasts but we didn't find out about any friends, apart from Bliss, who was a fleeting presence which basically meant the whole plot was solely based around Kelsey and Hunt which was a bit boring because not a lot happened!

About three quarters into the book, the pace picked up rapidly and the first kind of 'conflict' happened which was when I found the book hard to put down. However, it was quickly dealt with and then the book ended! It would have been perfect if that had happened about a third into the plot and then the rest was the solution to the problem where we could have found out more about the characters.

However, aside from my issues with the characters and plot, Cora is a great writer and she has a great writing style. As mentioned before, she is the master at detail which meant you felt like you were with Kelsey and Hunt on the beach or swimming in the sea or trying out some local food. The pace was good towards the end but was a little lacking in the beginning.

A new adult novel about one woman's quest to find where she belongs in the world with the help of a hunky, ex military guy.