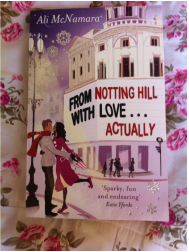 After reading Breakfast At Darcy’s I was eager to see where it all started for Ali. From Notting Hill had been sitting on my bookcase for ages and I finally plucked it from its space and dove into the pages. I have to say, I was gripped from the very first page and I couldn’t put it down!

Scarlett is a HUGE film fan. She loves anything remotely romantic and would count Notting Hill, Bridget Jones and Pretty Woman as three of her favourite films. Her fiancée David and dad have decided that she spends too much time trying to make her life into a movie and isn’t living in the real world. They think she needs some time away from home to see that actually, reality isn’t all lovey dovey and spontaneous, in fact, it’s quite the opposite! Maddie, Scarlett’s friend, informs her of a house sitting job in Notting Hill and Scarlett jumps at the chance, if only to walk the streets Hugh and Julia did. Whilst she settles in for her month in Notting Hill, things start to happen that prove to Scarlett that actually, maybe the movies are realistic and maybe she can prove her family wrong…

It must be said, if you have never watched Notting Hill, Bridget Jones, Sleepless in Seattle, When Harry Met Sally, Love Actually or Pretty Woman then it may be hard to understand the majority of the plot! There are so many references to these films which made me love it even more. Like Scarlett, I have spent many evenings watching Hugh Grant strut his stuff around Notting hill and wondered multiple times if I’ll ever be as lucky as Meg Ryan seems to be. There were so many hints and links to the films, it amazed me how many Ali managed to fit in, that I felt like I wanted to go and grab all of the films and watch them all over again for the millionth time.

I find it hard to think that anyone who has sat and watched a rom-com has not briefly wondered if they’ll ever find something as romantic and special as they do in the films. I think we all do; we all live in the hope we will bump into Hugh Grant if we walk around Notting Hill. So to have a character like Scarlett who was an exaggeration of these feelings was fantastic. I could relate to her on so many levels and I loved how she fought to show those who didn’t believe her, how realistic the movies could be. She developed fantastically and grew quickly as a character. In the beginning she was a little naïve and perhaps ditzy but at the end she was independent, strong and bloody brilliant! Her fiancée David was a character I found hard to have an opinion of; at times I loved him and at other times I hated him, it was hard to decide on a constant emotion for him! Scarlett’s next door neighbour Sean was a bit of alright and I loved him from the moment I met him. The eclectic cast of characters Scarlett met along the way reminded me a lot of Bridget Jones’ group of friends in the film and they provided many of the comical elements.

As with Ali’s other novel I read, I love her writing style and the ease with which you can read one of her books. Everything flows so perfectly that you don’t have time to stop and do other things with your day because you are so caught up in the journey of her characters. I know there is a sequel to this book and I have that book on my shelf which I will be reading straight away!

If you love rom-coms, romance or just generally, sweet love stories then this book is definitely for you! It was unlike a lot of other books I’ve read in this genre; the plot was really unique and although predictable in places, it was complete and utter indulgence.

Pretend you’re Julia Roberts with an orange juice stain on your blouse as you devour the story of one woman and her quest to find a real kind of love.