Here's Looking At You - Mhairi McFarlane 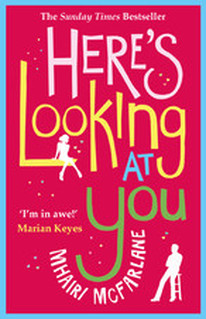 You Had Me At Hello was by far the best book I read last year. So when I heard about Here’s Looking At You I was desperate to get my hands on it! This has probably been my most anticipated release of 2013. Did it live up to the expectation? No. Did I love it? Yes, I think I did.

Anna is a history professor at UCL and has been pretty much terrorised her whole life. At school she was the target of the many bullies and spent the majority of her teenage years wishing she was someone else. At the age of 32 she still hasn’t quite got over the events from her past and when a school reunion is planned, her friends Michelle and Daniel urge her to go for some closure. So, she goes and she sees the man who caused her the most trauma: James Fraser. The gorgeous sixteen year old James had shamed her and bullied her in the worst way possible. But James doesn’t recognise Anna, he doesn’t realise who she is and so begins an interesting friendship that is full of secrets.

When you’re as good as Mhairi and you write a book as good as You Had Me At Hello, readers are going to expect something even better than the first novel and I don’t think she’ll ever write anything as good as You Had Me At Hello (not in a nasty way!). I was incredibly open minded about reading this book and although I was expecting big things, I knew it wouldn’t be Ben and Rachel’s story so I have to block that out of my mind when reviewing this one!

I did genuinely enjoy this book. Mhairi’s characters are incredibly well crafted and become extrememly real to you as you read about their lives. Anna was a very intriguing character and I loved finding more about her as I read on. I had a little trouble with James and here is where the problem lies. He was hot, no doubt about it. He was kind, no doubt about it. But, for some reason, some of his behaviour was a little incongruous. It seemed he was either hot or cold, there seemed to be no inbetween and when he got nasty he got very nasty and I don’t think I would have wanted to be friends with him after some of the things he said! However, saying that, I adored the book’s conclusion and wouldn’t have wanted it to end any other way.

This book was written from a third person perspective rather than first which is where it differs from YHMAH (sorry, I WILL stop comparing them soon!) and I think that could have potentially by a small reason why I didn’t enjoy it as much.

If, however, I look at this book and disregard YHMAH and judge this book based purely on what it was, I would say it was a good four stars. For me, the pace was slow and it took a while to get hooked and if I was honest, I think we could have joined the characters a good 150 pages in and then learnt more about Anna’s history over the course, instead of knowing it all at the beginning. After the first 150 pages, (this was where  I thought the story’s pace completely picked up) I was really hooked to the book and stormed through the pages to reach the conclusion and at times I wasn’t sure what the final conclusion would be.

Mhairi’s writing is bloody good and her descriptions of people and places are especially impressive. She writes with love and you can feel that love oozing from the pages as you read it. I am genuinely excited to see what comes next from Mhairi and I am already going to say that her third book is definitely one of my most anticipated of next year!