How To Get A (Love) Life - Rosie Blake 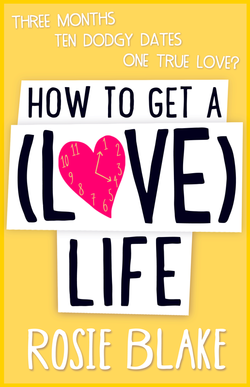 How To Get A (Love) Life (HTGALL) is Rosie’s debut novel and I was more than desperate to read it, so much so, when it landed in my inbox, I screamed, did a dance and then started reading it straight away.
How beautiful is the cover too?! Novelicious are always triumphant when it comes to covers!

HTGALL follows Nicola Brown on her quest to get a love life aided by her work colleague Caroline, her brother Mark and one internet dating site. Perpetually single Nicola starts the novel standing in an airport, on Valentine’s Day, about to embark on her first singles holiday. Before we have the chance to get excited about sun, sea and sexy single men, we are whisked back to the ‘beginning’ of Nicola’s quest and to the start of her brand new job working in an acting agency.

Nicola’s work colleague, Caroline, is convinced that Nicola needs to get out more and find a man to love, so dares her to find true love by Valentine ’s Day. What follows is Nicola clumsy navigating the dating scene, dating her brother’s friends and finding that love is actually quite hard to find. But, perhaps, love might just find Nicola when she least expects it…

I wanted to love this book SO much but, it just fell a little bit short for me. After all of the Twitter hype surrounding this book I was waiting for a genuine LOL fest and a really clever and witty book about one single woman finding love. Whilst this book was very funny in places, I did find some of the ‘comedy’ scenes to be quite cliché and some of the ideas were far from original (for example a scene in the book where Nicola is mistaken for an actress), very reminiscent of a lot of novels, films, TV shows I’ve seen before.

A few little things bothered me too: we didn’t have a very clear indication of how fast these events were happening, there was no kind of time indication between events so I didn’t know if they were happening days, weeks or months apart from each other. At times the narrative also felt a tad nonlinear and we jumped from event to event disjointedly. (I’ve just used the word ‘event’ far too many times!)

My other gripe with the book was there was a humongous lack of chemistry between Nicola and her main love interest. It was almost a shock when things happened between them because I couldn’t pick up on any tangible spark between the two…they were quite rude to each other, Nicola was especially blunt and there seemed to be no indication in their mannerisms or thoughts that they liked each other. I think this was why I felt a big disappointment when they ‘got together’. I didn’t feel like they knew each other at all. It would have been nice to have some more scenes between the two of them and more indication from Nicola’s thoughts and feelings that she was interested in him and felt something there.

Aside from that, I really did enjoy Rosie’s narrative voice. It was a nicely paced book and I was constantly turning the pages waiting to see what trouble Nicola would find herself in next. I enjoyed her relationship with Mark (her brother) and found him to be a very intriguing and comical character. Caroline was also full of laughs and her two children were adorably cute. Some of the dates were really well written and I particularly like the date in the kayak: that was some great writing. 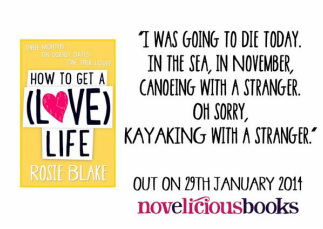 Nicola was an interesting protagonist and I found her to be quite shallow to begin with but over the course of the novel she redeemed herself and I thoroughly liked her by the end. I just wish she had a bit more oomph to her and a little bit more confidence to make her voice heard in certain situations.

If I’m honest, I think the main reason I struggled with this book is because it was very different from what I was expecting. I was hanging onto the hope Nicola would flee dreary England and spend some time in a warm, sunny country finding love and when that never happened, I was a bit gutted. The prologue threw me off a bit and I feel the book would have worked better without it being there so we jump straight into the action instead.

I am really keen to see how other readers enjoyed this novel because I feel like I’ve missed something and I need to re-read to fall in love with this book.

Rosie is a fabulous person but for me, this novel didn’t work as well for me as I hoped it would.

A fast paced debut about searching for love in all the wrong places when the right person for you is already in your life.