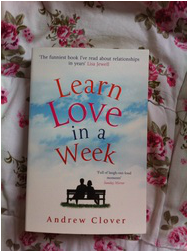 Recently I had the chance to interview the fantastic Andrew Clover about his debut novel, Learn Love In A Week. Here’s what happened!

1. Learn Love In A Week is your debut adult novel, if you could describe it in 3 words, what would they be?
Passionate romantic comedy.

2. What inspired you to start writing?
Most of our friends are single women. They mainly visit when they’ve been chucked, and they drink wine in our kitchen, and they tell me about the different kinds of terrible men that you can find out there. (You can go for an older man. That’s like getting a rescue dog. He’s got his own basket. Problems will emerge.) Listening to these lovestruck friends, I always give the same advice. One day, I put it in a 400 word piece in The Times, called How To Find A Man. That piece got me offers for 3 radio interviews, 4 magazine features, and an appearance on German TV. Sensing I was onto something, I made the advice for the centre of my novel. The beginning of it was Em, who’s desperate to be married; her friend Arthur gives her some advice, which will get her a proposal by the end of the week. But actually that became just the secondary storyline. During the week, Arthur is chucked by his wife, because she finds him too grumpy, and in a week’s time, she has an offer which no wife could refuse. Hence the premise of the book,Learn Love In A Week.

3. There are some great characters in Learn Love In A Week, which was your favourite to write?
I suppose my favourite is Em. She’s inspired by my wine-drinking friends, but she just had a gusto and energy of her own, which always took me by surprise. I remember vividly writing the scene where she goes to speak to Dan, who is, she believes, on the verge of proposing. Em is trying to remember Arthur’s advice – ‘be soft, let him speak’ –but eventually she gets so frustrated by Dan’s sheer uselessness, that she launches a great rant of fury. ‘Listen you f*cker! I am a woman! I am a gorgeous, desirable woman, and I’m fed up of being ignored! So I want you to propose, or I want you to f*ck right off!’ I loved that. I also loved it that she says: ‘But don’t think about that now!’ and she snogs him…. I never really felt that I was writing the Em scenes. I felt I was taken dictation, and it was always a joy. The ‘f*ck right off’ scene came out at the end of a long Tuesday. I remember I was still hyped up when I went off for the evening with my friend Becky, and started doing it for her in a taxi. It was one of the high points of the long writing process. You’ve got to enjoy those high points!

4. Do you have a favourite place to write?
I recently moved to a house in the countryside, and it’s got a studio in the garden where I’m very happy. The roof leaks when it rains, and the windows are too dazzling when it’s sunny, but it’s gloriously quiet. I also adore the money plants on my desk, in which some unfurling ferns have appeared. My five year old daughter often provides me strange decoration, which I love. Last week was some bottles of ‘Mixture’(shampoo mixed with toothpaste). This week it’s a glass full of weeds. Another advantage of the studio is that it’s just out of range of e-mail. It’s also out of range of the kitchen. Today I’m working in the house, because I need to send e-mails. It’s warm and dry, but I keep eating. I’m currently caning it through a packet of oat cakes and humus.

5. If you had one tip for aspiring authors, what would it be?
People always say: “Write what you love” but it can be hard if you’re like me and you love everything. I’ve tried writing thrillers, sci-fi, sit-coms, stand-up, cartoons, movies, columns… All very well, but most writers only have one genre they can do really well. The sooner you find your genre, the better. Look at Philip K Dick… He wrote maybe the best sci-fi ever; he wanted to write literary fiction. Roald Dahl was similar. He was hurt and furious his great adult novel never worked. I’m the opposite of Dick. I have a strong imagination, and love to use it, but people seem to like reading me best, when I’m writing realistic comic prose. The secret, I’ve found, is to write realistic scenes, which have an imaginative premise to them. There’s an early scene in Learn Love In A Week, where Arthur is describing a morning with his kids, but he describes it all as if he’s in World War One. After trying and trying and trying, I’ve found that’s the sort of thing I do best.

6. This book seems to have many parallels to your own life, would you say that you based a lot of this book on your own past experiences?
It does have strong parallels with my life, yes. The curse of romantic comedies is when you don’t believe them, when it all feels cheesy and formulaic. I was watching a rom-com last night, and we first saw the heroin, in her car, singing along to Christina Aguilera. I felt like I was watching a construct, that had been formed by a marketing company. I don’t think you’d feel that reading my book. To some extent, the book had to be personal… It’s about a man that must learn to love in a week, and he finds – as I do – that we’re besieged by bad advice – ‘talk about your feelings… talk about your sexual fantasies… talk about your yearnings, your dreams… Take a break… Take a mini-break…’ Do all this, you’ll end up at Luton Airport, at 6 am, next to someone who’s trained to talk about their feelings. I’d dispute that’s the best way to find love. Writing the book was a personal quest. I really wanted to know what was going to work.

7. Can we expect another book from you in the future?
Yes. Thank God! Random House took a two book deal with me. I’ve just finished writing the second one. You may have heard the great sigh of relief which echoed round the land.


Quick-fire:
What is your:

favourite colour?
I love the turquoise colour of Greek sea.
favourite song?
Chiquitita by Abba? ‘You’ll be dancing once again, and the pain will end…’ I nearly called the book Dancing Once Again.
favourite book?
Catcher In The Rye.
favourite word?
Delicious.
favourite food?
I’m currently loving these oat cakes with humus and tomatoes with olive oil and balsamic vinegar and wild garlic.
favourite season?
Summer.
favourite tv show?
Peep Show.
favourite author?
PG Wodehouse.
favourite animal?
The dog.
favourite day of the week?
Wednesday.  It’s always the best night for performing comedy for some reason.  Read my book on a Wednesday..  You’ll have to read all the parts yourself, but you should be able to make them funny…

Huge thanks to Andrew for his brilliant answers and for taking the time to answer these!