It's Got To Be Perfect - Haley Hill 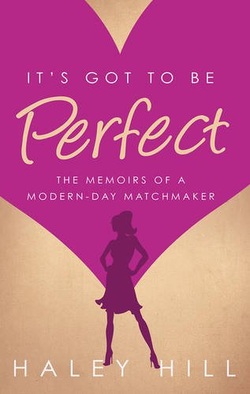 It’s Got To Be Perfect is a really interesting and in depth look at the modern dating scene. Haley has a lot of knowledge in this area; she set up the UK’s largest matchmaking agency which enabled her to experience all kinds of interesting things in the dating scene!!

Whilst she claims in the beginning of the book that all characters and scenarios are fictitious, you are almost positive that she has drawn on some of the things she learnt during her time as a matchmaker to create the eclectic cast of characters.

The protagonist of this novel, Ellie, is engaged to Robert but is distraught when she finds out he’s been cheating on her. Deciding she doesn’t need a knob like him in her life, she hurls the engagement ring into the gutter, picks herself up, dusts herself off and begins the quest to find real, true love. However, the road to true love isn’t very clear and she begins to realise she’s not the only one struggling to find love. Ellie takes it upon herself to help match other singles and sets up her own matchmaking agency.

Five years later, Ellie is in charge of a huge matchmaking empire and with so many successful matches under her wing, those around her are trying to help Ellie improve her own love life. Ellie has to face the question of whether everything really does have to be perfect….

I enjoyed reading this from the first page and was drawn into the crazy world of Ellie and her friends. Whilst her friends played an important role in the novel, I was far more interested and focused on Ellie’s journey; although I did enjoy meeting Steve, Victoria and Mr Marbella along the way!!

The style of It’s Got To Be Perfect was different from what I’m used to. It felt like it was non-fiction at times as the situations the characters found themselves in were so believable, it could have easily been real! Haley’s writing is really sharp and clever plus it’s easy to read which is my favourite kind of writing! The only small problem I had were the character names. There were so many characters mentioned in the book that at times I was confused as to who was who. It didn’t help that two of Ellie’s employees had names beginning with ‘M’! It took me a little while to work out which one was which. Aside from that, I really enjoyed this book and think a lot of other people will too.

An interesting look at the modern dating scene that would be a great read for a single woman but also would be enjoyed by someone who already has found the love of their life.