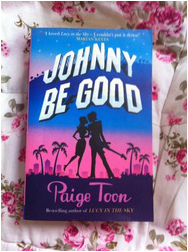 Meg is about to leave for LA to begin a new PA job for a famous rock star called Johnny Jefferson. She was offered the job after her boss passed on her details to Johnny’s boss and she was given the job with little questions asked. She is about to move into his crazy rock star mansion and her friends are so jealous as they all fancy Johnny badly! Meg tells them to stop being silly and reassures that she doesn’t fancy Johnny at all. As Meg arrives in LA and starts to settle into the massive house she begins to realise how much this is going to change her life. When Johnny arrives at the house she is immediately struck by how good he actually looks in real life. (Uh Oh!)

Meg soon gets swept up in the celeb lifestyle going out for dinner with Johnny and his friends, attending premieres and concerts and travelling in limos and Bugatti Veyron’s! She meets Christian who is Johnny’s best friend, and he starts to ground Meg and warns her to be careful around Johnny. Meg is troubled by the fact Johnny’s last PA left quickly and no one will tell her why. Is Meg going to just become another notch on Johnny’s bed post before she gets fired? She makes a promise to herself to not fall for him.

I loved Meg and Christian but I found myself in a dilemma when it came to Johnny. I didn’t hate him but I didn’t like him. I hated the way he treated women and how he used fame to excuse his bad boy ways. Although this could be a truly accurate portrayal of what it is like to be in the public eye as a rock star, ‘Sex, Drugs and Rock & Roll’! I did feel for him as he appeared to have a pretty rubbish childhood which made me feel guilty for hating him sometimes.

I raced through this book as the story line was so addictive. Paige always leaves you wanting more and I constantly found myself thinking about this book when I wasn’t reading it.

Another brilliant read from Paige.