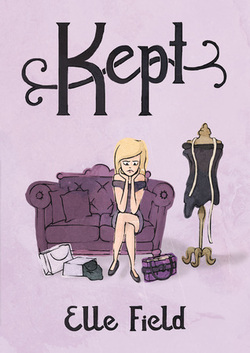 The lovely Elle (Claire is her real name) contacted me to ask if I would like to review her debut novel and I was extremely happy to oblige! As soon as I saw the cover, I knew I’d enjoy it.

Kept follows the life of, Arielle, a spoilt brat who suddenly looses everything and has to learn how to become less selfish and more selfless. She has lived the life of luxury with her boyfriend Piers. He goes out and earns the money and she just spends it all on clothes and shoes. When Piers throws her out because she isn’t pulling her weight she has to quickly learn how to change her ways.

Elle is a really witty author; there were some really clever parts of this novel and I found myself laughing a lot. The only issue I had with this book is that I really disliked the protagonist which, at times, made me reluctant to pick up and carry on reading. I don’t know if the character of Arielle was written to be disliked, however I cannot see a lot of people ever having any sympathy for her! I found her to be extremely annoying in her outlook on life and hated the way she felt that everything should be handed to her on a plate. To be fair, she did change over the course of the novel but there were still a few tiny aspects of her personality that I disliked. HOWEVER with that being said, it takes a lot for me to really dislike a character so intensely and I have to say that Elle’s character descriptions and character development were pretty impressive.

The plot was unique and so were the multitude of characters. Often I find that similar kinds of characters keep reappearing in this genre but Elle’s characters were well thought out. I would have LOVED an epilogue at the end so we could find out a little bit more about some of the smaller characters e.g Arielle’s friend Ob. When I finished I was gutted that there wasn’t more to the story but I am hopeful that with Elle’s third novel (which I believe is a sequel to this one) we will find out all about what happened to these characters!

This is a really good debut and I am excited to see what Elle has in store for us with her next novel.