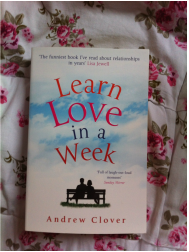 Andrew Clover is best known for his Sunday Times column called Dad Rules. He is married with three children and lives in the beautiful city of Canterbury (not far from me!) He has acted in various different shows and has written a book called Dirty Angels aimed at teenagers. This is his first adult novel. I was kindly sent this for review by the lovely Najma Finlay at Random House.

Arthur and Polly have been married for ten LONG years. They have two young children together and Polly is the breadwinner for the family whilst Arthur is a stay at home dad or a WAD as he affectionately refers to himself (Writer Artist Dad). He claims he is in the middle of writing a best selling novel but Polly is sick of coming home to a dirty house, a fruit bowl full of rubbish and a husband who still hasn’t written a bestseller. Suddenly Polly meets James Hammond. He is the one that got away, her road not taken. He still ignites a fire in Polly and she seems to do the same to him. Polly doesn’t know where her life with Arthur is really going but she knows deep down that she still has feelings for him. James has invited Polly over to his house in a week’s time. Over the coming week can Polly learn to love again and can Arthur ever become the man she wants him to be before it’s too late? Will she surrender herself to James on Friday night or can she remember why she first fell in love with Arthur?

I really laughed at this book, it was FULL of comedy and wit. This novel is told over the course of one week and through the perspective of three different characters, Polly, Arthur and Em (Polly’s friend). The characters were all really well developed and I fell in love with Arthur’s character, he was so laid back about his career and was drifting along on a cloud of optimism until Polly bursts that and brings him shooting back down to the ground. Polly was quite funny although she annoyed me in certain parts however I could see the motivation behind a lot of her behaviour.

I can’t help but draw parallels between Andrew Clover’s life and this novel. After reading interviews with him and his ‘about me’ section on his website it seems that a lot of the ideas from this book came from experiences Andrew has had during his life as a father and husband.

Overall this is a brilliant book that will have you laughing through the sheer madness of it all. A definite book to add to your ‘to read’ pile.