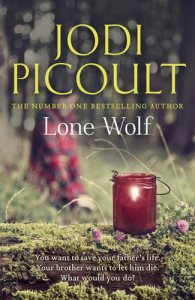 Many years ago I stumbled across My Sister’s Keeper and I felt like I had discovered one of the most amazing authors ever. I continued to think that as I read The Pact and Nineteen Minutes. However, after a while, a lot of Jodi’s books began to feel really ‘samey’. They all seemed to blend into one big moral dilemma and I couldn’t find any enthusiasm to read them.

I was half excited and half dreading picking up Lone Wolf this month. Excited to be getting back into Jodi’s world but dreading because I knew this would be a book that would probably be quite ‘samey’ to all of her others.

Jodi bases her books around moral dilemmas, which can be quite interesting. They tackle difficult subjects head on and leave you thinking, what would I do? Lone Wolf is no different and presents the moral dilemma of life support and whether you should turn off someone’s life support or not.

Cara is a daddy’s girl and she has buckets of love for her father Luke. Luke is different from most dads though because he is a wolf expert and has spent years of his life living in the wild with a wolf pack. One evening, Cara and Luke crash on the way back from a party and Luke suffers quite significant brain damage and goes into a coma. Edward, Cara’s brother, who disappeared from the family six years ago, flies home to help Cara and her mother (who is now married to someone else after she and Luke got divorced). The two siblings instantly clash. Cara wants to keep her dad alive but Edward thinks that the best thing to do is to terminate the life support. The two battle it out until things get out of control and they end up learning more about their father and how to deal with heartbreak in life.

I had no motivation to pick up this book at all and it literally took me all month to read it because I just kept reading a chapter here and there. I didn’t hate this book but I wouldn’t say that I enjoyed it. There was an element of mystery that appeared about halfway through that spurred me on a little to finish it but I found it pretty dull.

The brain inquiry references I was able to understand due to my psychology background, but for someone who had no clue, I can imagine those bits were completely confusing. Likewise, the whole wolf references went straight over my head and, even though the behaviours of the wolves could be used to explain human behaviour, it just felt like the wolf references were there to pad out an otherwise pretty boring plot. I could have told you, from reading the blurb, what would happen in the end. And, surprise, surprise, I predicted right!

I hate it when I don’t enjoy a book and I feel bad because the writer has worked so hard to create their novel but I’m going to be honest and say I wouldn’t recommend this book unless you are Jodi Picoult’s biggest fan!