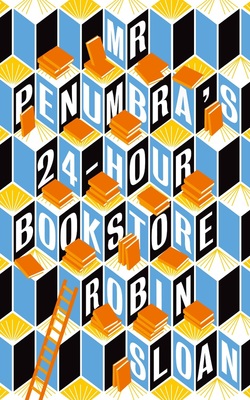 If you haven't heard of Mr Penumbra and his 24 hour book store then I don't know where you have been living! I have heard non-stop about this book from bloggers and booktubers so finally decided to pick it up and read.
I wasn't sure what to expect from this book as the blurb was pretty ambiguous.
We are introduced to Clay Jennon who is the protagonist for our novel. He works in Mr Penumbra's 24 Hour Book Store and is a new clerk, so is not very aware of the importance of the book shop. The first thing Clay finds odd is that the bookshop is very rarely visited by customers yet is open all hours of the day and night. The second thing Clay wonders about is why the vast majority of customers borrow books full of code. Deciding he wants to find out more, Clay enlists the help of a Google genius, his flatmate and one incredibly rich school friend and they embark on a mission which will take them into the mysterious world of The Unbroken Spine.

I have to hold my hands up straight away and say that the small fantasy element of this book was tough for me. I found it hard to understand at times which meant the flow of the novel kept jarring and I had to re-read sentences at points to try and make sense of what I was reading. Now, this is no fault with the author, but more a fault with me as the reader who still has trouble engaging in the fantasy genre. Whilst I say this book touches on fantasy, I would also suggest it is a coming of age mystery which explores the growth of technology and the constant battle between the old and the new.
Clay is a very interesting protagonist and one I enjoyed reading about but at times I felt that everything was very convenient for him and he had the right friends and the right stuff to complete different tasks or 'missions'. Every problem seemed to have a quick solution but perhaps this is an element of fantasy that I am unaware of.
I found Penumbra challenging as a character and it took me a while to decide how I really felt about him. I didn't know whether to like him or not which was something I wasn't expecting. I was perhaps a little disappointed by the lack of female characters; there are only three I can think of at I type this. One of them was an important character but the other two were mainly background characters who hardly developed. I would have liked to seen more females I think.

Sloan writes well and keeps you connected to the plot which travels at a decent pace making you reluctant to stop reading. I enjoyed the travelling element of the novel, the descriptions of the new places Clay and his friends traveled to were inviting and made me excited on their behalf. Sloan's main characters were all very well developed and even though I didn't love any of them, I certainly wanted to know their story.

The novel is divided into three separate 'parts' which I thought was a little bit of a cop out! At times we skipped from one place to the next without knowing how or when they got to the place they were going, again, a little bit too convenient? Or me just not understand the fantasy genre?!

The message this book carried was clear and was explored in detail which left me pondering the importance of technology and how vast the internet is and how quickly everything seems to evolve. I felt slightly philosophical at points which, aside from making me feel clever, added a nice layer to the plot which is always well appreciated. This book had a lot going on below the surface.

I have to say this book is one that I wouldn't rush to re-read anytime soon but I can see why it is loved so strongly by such a large group of people and I think you would be foolish to not pick this book up and give it a go. I would also be excited to see what Sloan writes next and would be eager to pick it up and read.

An interesting and thought provoking novel set in a dusty old bookshop owned by an enigmatic old man.