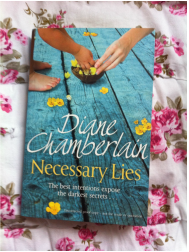 I have gone through a bit of an odd phase recently where I haven’t read the blurbs to any review books and have just started them to see where the story takes me. I often find that blurbs can give you preconceived ideas about the plot and can sometimes spoil key moments so I have decided to refrain from reading them! So when I started this book I had no idea what to expect.

We start in 2011 in a bedroom where two names have been carved into the wall inside a wardrobe. There are no clues about who these names belong to and why we are in this setting but it all becomes clear over the course of the novel. We are then transported to a 1960’s North Carolina tobacco farm where we meet Ivy, Mary Ella, their grandmother and Mary Ella’s young son William. They are a poor family and only have a roof over their heads because they all work on the tobacco farm.

Jane is then introduced. She is a recently married young woman who wants to have a career before settling down to have children with her husband. Her husband is against the idea of her working because he thinks she should be at home doing the housework and being a wife, not a career woman. However, Jane ignores his views and trains to become a social worker. One of Jane’s families turns out to be that of Ivy’s. She befriends the young teenage girl and tries to help their family through their days of poverty but soon Jane is thrown into a moral dilemma. Should she do what she’s told by her boss or should she do what she feels is right? Should she keep a secret or will it come back to haunt her?

This was an incredibly frustrating and moving story. The topics that are covered in this book are powerful and made me angry reading about them! We are so lucky that racism and sexism has changed greatly since the 1960’s. With any book that covers sensitive topics, it has to be done in a realistic but compassionate way and Diane really achieved that with this book. Whilst what I was reading about was shocking and quite frankly disgusting, I couldn’t help but feel like I wanted to know more about the characters’ lives. I wanted to know more about how the human race could have ever existed like that; it made me incredibly thankful for the relatively free and non-prejudice world we now live in.

Diane’s characters are incredibly strong. One of the main characters Jane was a real gem. She was a powerful, thoughtful, fighter who wanted to make a change in the world and live her life free from the constraints that society and her husband placed around her. I loved her spirit and motivation to make a change in the world. Ivy was also the second protagonist who I found a little hard to relate to but purely because I’ve luckily never grown up in stark poverty so some of the ways she behaved and some of the things she thought were a little alien to me. However she was also a strong girl who had fight in her the whole time.

The descriptions of the tobacco farm evoked such a strong image in my mind and I could almost smell the parched mud and feel the burning sun on my back as I read about them.

This is a stunning novel that will touch your heart and leave you wondering if you would ever have the courage to stand up for what you believe is right.