Not Quite Ready - Sophie Fletcher 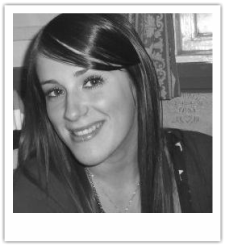 Sophie is a writer, blogger and shoe lover from a pretty Lancashire village. (A girl after my own heart!) She has a beautiful blog called From Silverdale With Love which I read regularly (you'll enjoy it if you love horses) and look forward to finding out what she's been up to with Betty (her trusty car!). You can follow Sophie on Twitter and see what she gets up to! Sophie was the first person to send me a piece of flash fiction and she has set the bar high! So, without further ado, here is Sophie's piece called Not Quite Ready.
Hannah gazed blankly out of the window, the snow was getting heavier and the trees which had been standing proudly through the blizzard just an hour before were now sagging sadly from the weight of the snow. The snow had started that morning when she had been to feed the horses, bundled up in their winter rugs they had chomped contentedly through the slabs of hay she had put down for them, not bothered by the dark snow threatening sky. Hamish had stayed wrapped up inside the car while she fed them, his little nose pink from the cold. Usually he would be charging around the field in his wellingtons, as she tried in vain to stop him jumping in the water trough to break the ice.

She looked over at Hamish now, sat on his bean bag looking at a picture book. He still wasn’t old enough to know how close it was to Christmas but she knew that come the morning when he saw the presents under the tree he would be giddy. She lay back on the sofa hugging a pillow and prayed that he would come, that he wouldn’t be perturbed by the snow.

Hamish slid off the bean bag and waddled over to her, his nappy gently rustling. He was wearing the jumper her mum had knitted for him at the beginning of the winter, it was still too big and she had had to roll up the sleeves several times. He climbed onto the sofa and stood on his tiptoes so he could see out of the window. ‘No’ he said pointing out of the window. Hannah laughed revelling in the innocence of Hamish’s inability to sound his S’s yet. ‘Yes there’s lots of it isn’t there, can you see it all over the fields?’ He nodded mesmerised by the swirling white, then sat down on her lap and began to suck his thumb. She cuddled him in close.

Hannah couldn’t work out if it was easier or harder to be a single parent at Christmas, she supposed she would decided when it was over, this being the first year of it being just her and Hamish. Her mind cast back to last year, how happy she had been, how perfect her little family had felt. A chill passed through her at the thought of how easily it could all be taken away.

James had left four days after Christmas, she didn’t have time to object, his mind was made up. Family life wasn’t for him, he felt suffocated. She had just bathed Hamish and put him to bed when it happened. Descending the stairs she had noticed bags in the hall way and she could hear him fiddling with some coins in his pocket. She had stared at him as he spoke with a pleading look in his eyes. She knew he wanted her to let him off the hook, to tell him it was fine if he left, but she didn’t say anything.

Her thoughts were suddenly disturbed by some crunching outside the window, and as she looked around her eyes met the smiley face of a bearded man. Her face broke out in to a wide beam, he’d made it. She picked up Hamish and went to the door. ‘Dad! You made it!’ She said as he engulfed her and Hamish in a giant hug. His navy jumper scraped her cheek and he smelled faintly of tobacco. ‘Of course I did, I said I would didn’t I,’ he gave her a quick peck on the cheek. She smiled back at him, and looked between her dad and her son, who was giggling as his granddad tickled his tiny tummy. The sight made her warm inside. ‘Now lets get inside,’ he said taking his bag from his shoulder, ‘And get Christmas Started.’