One Moment One Morning - Sarah Rayner 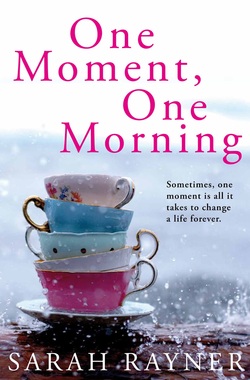 This is the story of 3 different women;

Anna: who is hard working and fiercely committed to everything she does including trying to cope with her abusive relationship with alcoholic Steve.
Lou: a counselor in a school working with troubled children is trying to find love and happiness, despite not being honest with her family about her sexuality.
And finally Karen, a mother of two happily married to Simon and on the verge of moving house.

Then in one moment, one morning, as the title of the novel suggests, life changes for them all. Karen’s husband collapses and dies on a train to London (don’t worry that’s not a spoiler – it happens very early on). Unaware it is her friend’s husband who has collapsed Anna is furious that the train has had to stop and because she is running late decides to take a cab the rest of the way offering stranger Lou a lift.  Lou has witnessed what has happened to Simon and Karen and becomes involved with the aftermath offering support and friendship in time of need.

What I really enjoyed about this book maybe the one thing that people dislike about it and that was the pace of the story. After the initial event, the pace and subsequent pieces of actions are very few a far between. The story focuses more on how the three women cope with such a tragic event and uses flashbacks to explain how they got to this particular point in life. By slowing the pace right down Sarah Rayner can really establishes the characters, their relationships and uses beautifully descriptive writing to do so. The story takes us through week immediately after Simon’s death and culminates just after his funeral.

The story could have been very upsetting and in parts it is however it is also thought provoking. It really made me think about life and how I would react to certain situations and not just the death of someone close to me. There is Anna and her abusive boyfriend Steve and the questions their strained and obviously flawed relationship throws up. Should she stay with him and support him through his alcoholism or leave him, after all he has let her down time and time again. The relationship Lou has with her mother, even without the added ingredient of Lou sexuality, is also very difficult and impacts on all aspects of her life.
I was particularly moved by the way Karen dealt with her kids after Simon dies. I can’t imagine how hard it would be to explain something like that to young children however the way Sarah has written their little interactions is not only beautiful but also very touching.

There are the odd cliche's within the characters. Karen’s marriage seems perfect – why do bad things always happen to good people! Lou is a gay woman who can’t bring herself to come out to her mother so hides away under a blanket of lies and Anna seemingly is a saint amongst men who has put up with so much but all that can be forgiven as it is a very moving and captivating novel, which will keep you reading late into the night.