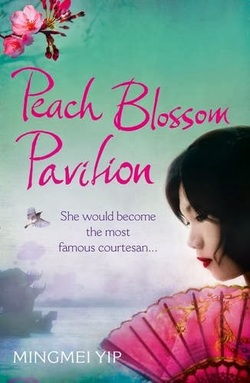 Peach Blossom Pavilion is a book I would have never chosen to read. It was only when I was contacted about being part of the blog tour that I decided to step out of my comfort zone and give it a go. As I turned the last page I wondered whether I would have finished it if I wasn’t reviewing it and the answer is: I’m not sure.

Peach Blossom starts with an elderly lady (Precious Orchid) sitting with her granddaughter and her granddaughter’s boyfriend – they are eager to write down their grandmother's memoirs. As Precious starts to recall the story of her life, we are transported back to the early 1900’s Shanghai and to a family torn apart. Precious (real name Xiang Xiang) is sold to a prostitution house after her father is murdered and her mother moves away to become a nun. At only thirteen years old, Xiang Xiang is thrust into adulthood and is expected to become a worthy prostitute under the trusty wing of Pearl, an older prostitute. Over the course of this novel, we follow Xiang on her journey through adulthood, being taken on her journey from naive young girl to experienced, bitter adult.

This is a tricky book to review: it’s not something I would normally choose to read and I don’t know if I enjoyed it. It is weird to think about enjoying a book about a young girl sold into prostitution so I think instead of enjoyment; it was more intrigue that kept me reading. It’s not a light-hearted easy read; instead it’s full of challenging ideas and situations which were in places slightly difficult to read.

The main character, Xiang Xiang, was a very honest and believable protagonist which added to the urge I had to keep reading about her – I cared about her. The rest of the characters were mainly vile and were the kind of characters who you would be happy to see die on the pages. There were few who I enjoyed reading about which made for quite an interesting reading experience – normally if there is just one protagonist, you sometimes question their viewpoint but for the whole entirety of the book I was in agreement with Xiang Xiang: the men were vile and the women in charge of the prostitutes were just as horrifically behaved.

This book was set in China in the early 1900’s but if I’m totally honest, aside from some phrases and brief descriptions of food, rickshaws and gardens, it didn’t have a very oriental feel about it. Perhaps this was mainly because the action was so character based that I had little time to appreciate the Chinese elements: either way, it wasn’t a striking part of the book. There were limited character descriptions so in my head, I pictured them as English looking and English speaking characters…strange!

The plot was reasonably paced and there were a few transitions from past to present which divided the narrative nicely. The book was split into three parts which focused on different parts of Xiang Xiang’s story which helped to move the story forward in time and to a whole new aspect of Xiang’s life. Yip’s writing was consistent throughout and whilst it wasn’t immature in its tone, I felt it could have been a little stronger in places: the descriptions of sex were quite strange. For example to describe a penis, the word ‘jade stalk’ was used which whilst in context when Xiang was young, didn’t have a place when she was a fully grown adult and it felt a little odd at times to be unable to read the ‘real’ names for certain body parts.

This book isn’t for the faint-hearted, the subject matter isn’t easy to read and it will take you from your comfort zone, however, I did find this book compelling and wouldn’t be adverse to reading something similar in the future.

A shockingly realistic portrayal of the life of a young Chinese prostitute and her journey from being nothing to becoming something.