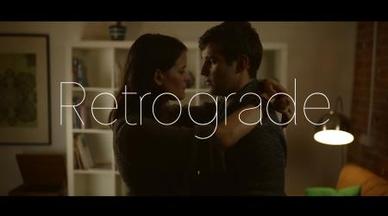 Let me first start by saying I am no film expert, not even in the slightest! My only knowledge is two years of film studies at school and even then I spent most of the time watching films by the Coen Brothers and too many Tim Burton films. However, that’s totally irrelevant…

So, if I try to be really clever by slipping posh words in here then you do have permission to laugh at my level of uneducated-ness.

For my film studies course we had to make a film. We had to script it, storyboard it, film it, edit it and then write a synopsis and make it look as good as humanly possible. We made THE worst short film I think you will have ever seen. I have so much admiration for someone who has the skill to make a short film and Retrograde is not just any short film, it’s a BEAUTIFUL short film.

Retrograde tells the story of retrograde amnesiac, Will, and his journey of recovery. Whilst attending a regular support group he meets a woman, Annabel, who is very quick to earn his affection. Together they make steps in discovering who Will really is and as they edge closer to the truth, the whole notion of identity is examined.

The establishing shot is one of pure intrigue and I love the lighting and framing. Everything is noticeably bleak and lacking in bright, happy colours. It really sets the tone for the rest of the piece.  The two main characters meet each other in a support group and instantly I was gripped by their story. I wanted to know more about Will and I loved how over the course of the film we learnt about his life at the same time he did: it was a really well executed idea.

The rapidly changing scenery was beautifully shot, from the support group to the pavement outside, to the restaurant and to the flat. The mise-en-scène (eh, posh word!) was perfect in every single frame. There was almost a claustrophobic feel to this film: I was never drawn to the background, I was always so focused on the characters and this was a real strength of the piece. Croxall has a real talent in filming each actor’s every nuance and they translate beautifully on screen.

There was one small, incy wincy, tiny part which I think interrupted the flow a little and felt a tiny bit unnatural and that was when they left the restaurant and Annabelle said ‘it’s time to go’. I think it would have perhaps been more effective if it had cut to them walking down the street just as he discusses how he thought his pin would be instinctive. However, it’s really not a major thing at all and works perfectly well with it too. In this scene we get our first taste of non-diegetic (fancy word) sound and I LOVED how this was used. It was the perfect pitch and pace for the despair that Will felt. As the film progressed, more music was used and every single piece so cleverly reflected the mood: the music in the flat was just perfect. Ending a film is always tricky but Jason has really excelled with his. The slow paced music was the perfect accompaniment to the script and once again, Jason demonstrates his keen ear for perfecting sound.

The script was expertly written and was incredibly insightful whilst being compelling: you want to hear what each character is going to say next. Poignancy is a key factor in this plot and there were so many beautiful lines and ideas floating throughout.

The strength of this film is simplicity. It’s not over the top and show-offish, it doesn’t pretend to be something it’s not: it uses some of the simplest locations but uses them effectively.  The camera angles aren’t ‘arty’ or pretentious, they are, again, simple and effective: they convey the message of the film beautifully.

Will and Annabel as characters were strong, likable and very well acted. Huge credit must go to them for taking Jason’s idea and portraying it so charmingly, but, likewise, huge credit to Jason for choosing to cast such great people for the roles.

Jason is certainly one to watch out for. This short film is well above the standard I would expect from an indie short film and I enjoyed every single second. I was slightly worried 22 minutes of film would become a little tiresome but it is not a chore in the slightest to watch.

Hugely excited about what could come next from Jason!

A professional, poignant short film about the power of memories, identity and living for the future. 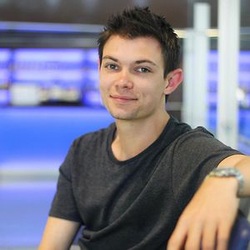 Jason grew up in Southwell, Nottinghamshire and went on to study photography at The University of Plymouth. Completing his degree he returned to the midlands and became a self employed photographer based in Nottinghamshire and Derbyshire. Film had always been a passion of Jason’s and he soon made the transition into video production. His first short film ‘The Thunderbird’ was released online to positive responses. Spurred on by the passion he had for filmmaking, Jason began working full time in video production for Fat Free Media in Nottingham but still made time outside of his profession to make short films.
Watch the film via Vimeo
Connect with Jason on Twitter, Facebook and his website.