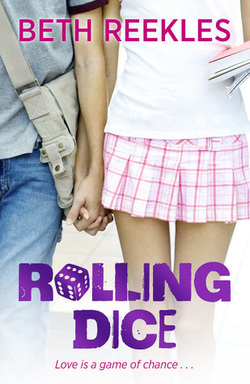 Over the past few months, Beth Reekles has been in and out of the newspapers, on the TV and on the internet as she was hailed one of the most influential teenagers of 2013. I was insanely jealous to find out she had written and had published two of her books and she’s only 18. HOW DID SHE DO THAT?! She’s also now studying physics at university. Girl, you’re putting me to shame!

Realising I could learn a lesson or two from Beth (and also because I was secretly hoping her books would be rubbish so I could feel better about my own) I found one of her books on my kindle! It seems I had downloaded it from NetGalley and just not got round to reading it yet. So, there I lay in bed, praying I could find fault with her writing so I could believe I still had a shot at getting my book published…but as I started reading, all thoughts of that vanished from my head and instead, I got lost in an incredible story about Madison and her transition from unpopular geek to hottest girl in the school.

Madison has just moved from Maine to Florida and is about to start a new school. She is dreading it because all her life she’s been known as ‘Fatty Maddie’ and the last thing she wants is more years of torture. She meets Dwight, in the local coffee shop when he serves her a latte and they become friends and he invites her to a beach party. It’s at this beach party she meets Bryce: hottest jock, drives his own car and is interested in Madison. Madison soon finds herself swept up into the popular crowd leaving Dwight behind and she begins to experience high school life from a totally different perspective. No longer is she the girl being bullied, now she is the popular one who everyone aspires to be especially when she has Bryce on her arm.

But is popularity all it has cracked up to be? Or is there more to be said for being yourself and following your own heart?

I really lost myself in the pages of this book. I was invisible to the real world as I sat and inhaled this book in just two sittings. I kept turning the pages, eager to find out what would happen to the characters next and even though it was a predictable ending, (satisfying too) I didn’t find it too much of a disappointment. Sometimes predictable endings can be ruined if they’re not executed well but I was pleased with the conclusion of this novel and am secretly hoping for a sequel in the future.

I found Madison to be a bit of a naive character but paradoxically she was very sure of her own mind at times. She resolutely refused to drink and was unconcerned by certain stereotypes she was supposed to live up to but then at the same time she had an inner battle about trying to decide who she really wanted to be and whether fitting in with the crowd was the best way to get through high school. Really, it is a lifelike portrayal of what it is like to be a teenager! I certainly could empathise with what she was feeling at times. I liked the progression she made throughout the novel and was impressed with the Madison we see at the end of the book.

There were a lot of stereotypical characters within this book which weren’t a bad thing, it just meant a lot of their behaviour was predictable but again, I’m fine with predictable if it’s pulled off well! I think this is Beth’s second book so it will be interesting to see whether it’s a marked improvement on her first book called The Kissing Booth.

One strange thing I noticed is that Beth is an English girl yet writes books about American girls…I found that intriguing and would love to know why she chose to write about them.

An impressive YA novel that deserves the hype that surrounds it!