Say It With Sequins: The Rumba - Georgia Hill 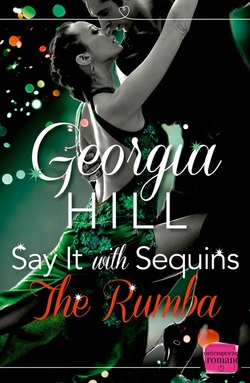 I am probably one of the biggest Strictly fans the world has ever seen, so when I saw this book I knew I would love it! This is the first in a series of three books and I am excited to see whether the same characters will be visited in each book or whether we will meet a new cast each time.

This novella follows the life of Julia who is taking part in a new TV series called Who Dares Dances. She is struggling with her dance partner as he’s demanding and stroppy when all she wants to do is get it right. Alongside Julia there are a whole host of other celebrities competing to win the series, including Harri Morgan, a children’s TV presenter who is rather attractive.

As the competition heats up and Julia and Harri are paired together to dance a Rumba: the dance of love, the chemistry between them is palpable and they dance into the final together they discover what really is important in life.

I really enjoyed this novella. It was a short, sweet read that I read in one sitting and found myself invested in the characters and their story. As always with novellas, it is sometimes hard to get lost in the story as it finishes before you have the chance to do so, and this one was no exception. But, saying that, it was an enjoyable read!

Georgia’s writing was really smooth and flowed nicely from scene to scene, the descriptions were well written and the characters developed well over the course of this novella. I enjoyed the plot and thought it was quite a unique idea (obviously not the TV show, but the idea of the novella!) I’ve never read a book about a TV dance competition before so it was a nice change from the normal chick-lit reads that are set in ‘real life’ rather than in a TV studio.

Overall, this was a really lovely novella that showed of Georgia’s writing well. I look forward to the next novella in the series!