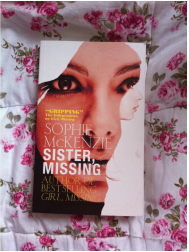 This is the sequel to Girl, Missing and I read this straight after I’d finished that one. With the characters and their original story still fresh in my mind I was able to transfer to this one with no trouble at all.

The story starts a few years later, with Lauren staying in a holiday cottage with her biological mother and two sisters. Between these two books, Sam, Lauren’s biological father has died. Madison and Lauren are closer than ever and they decide to go to the beach one morning. Lauren, being 16, is more that capable of looking after her nine year old sister, or is she? When Madison begs Lauren to let her buy the ice creams, Lauren supervises and watches but get momentarily distracted by a man asking if she knows where someone is. Lauren quickly shakes her head and looks back to find Madison but she’s gone. Vanished. Someone’s taken her and Lauren thinks she might know who it was….being kidnapped herself all those years ago makes this new situation seem all too familiar.

I personally preferred Sister, Missing to Girl, Missing. This could have been due to the fact Lauren, the main character, was a little older so I felt like I could relate to her a little more. It also felt that there was more drama and more suspense than the previous one. It didn’t end how I thought it would which was refreshing. There were a larger host of characters too which made for some fun scenes and I liked how everything was linking in nicely together.

As always, Sophie’s writing is fabulous and she has you interested from the very beginning. This book is again aimed at a YA audience so it was quite tame but not any less enjoyable. You’d be able to read this book in one sitting; I did and it took me less than two hours.

A fast paced, intriguing sequel to the bestselling YA novel, Girl, Missing.