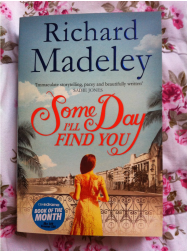 When I was younger, I can remember sitting in front of the TV watching Richard and Judy with my parents. At the time they seemed old and boring (when you’re little anyone over the age of twenty seems old and boring). However as I grew up, their presence in the book world increased and I found myself taking great interest not only in their book club but in the couple themselves. Judy released her debut novel last year and I have a copy waiting to be read but when Rik from Simon & Schuster contacted me asking if I’d like to review Richard’s debut, I jumped at the chance.

Stephen King once said that if you don’t have time to read then you don’t have time to write and I believe this to be incredibly true. Richard is, obviously, a prolific reader, reading the books for the book club each year so he has a great knowledge about the current market and the tools other authors use to tell a story. I think he has hit the nail bang on the head with this book. It is a fresh, exciting novel that is unlike anything I have ever read and is written with such care and passion that you will be unable to tear yourself away from the pages.

Diana is a beautiful young woman who lives with her mother Gwen, father Oliver and brother John in the south of England. It is the summer of 1938 and her brother John is training hard in preparation for a war that is seemingly imminent. One day he brings home his friend from the RAF called James and Diana falls head over heels for the blond haired blue eyed fighter pilot. They embark on a whirlwind romance and Diana soon finds herself engaged and preparing to be married to her true love.

Unfortunately, disaster strikes in the cruelest of ways and on the afternoon of their wedding day, minutes after they’ve married, James and John get called away to go into battle. Sadly, James loses his life when his plane is hit and it explodes, falling to the ground with no hint of the passenger alive. Diana, as you can well imagine, is grief stricken and knows not what to do with herself. There is a small glimmer of light though as she soon finds out she is carrying James’ child. At least she will have something to always remember him by.

It is now the early 1950′s and Diana lives with her new husband Douglas and her daughter Stella in the south of France. She is enjoying life in the gorgeously sunny Nice and has finally accepted her past and moved on. But fate can be extremely cruel and, as if Diana hasn’t had enough pain in her life already, she is about to be sucked into a situation that she could never have predicted causing her to question everything she thought she ever knew.

The first half of this book is perhaps one of the greatest love stories I have ever read. As Diana and James fell in love, I found myself beaming with happiness, the descriptions of the characters and their emotions was amazing which added to my emotion as a reader. The second half of the book changed pace and genre quite considerably and it turned from a love story into a thrilling mystery that had you desperate to turn the pages to discover what was about to happen.

Amazingly, I found that the whole book was un-put-downable, even the first half which was quite slow paced was ridiculously addictive and throughout the second half I was aching with frustration trying to work out what was going to happen.

The ending was completely unexpected and I was nicely shocked by what had happened. The characters were so well developed and I was in awe that a male author could write from the female perspective so well. At times I completely forgot that it was a male author writing this novel.

I can’t believe that this is just his debut and I cannot bloody wait to find out what other gems he has in store for us.

This book will have you smiling with happiness and tense with fear as Richard takes you on a journey that spans decades. The words flow from page to page without a hint of disjointedness and are almost poetic in their form. Every single word has it’s place on these pages and I cannot recommend this tale enough. Truly fabulous.