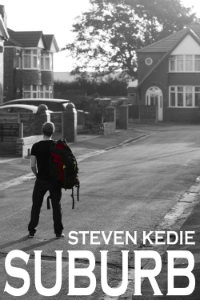 Reading the blurb of suburb left me intrigued and had me wanting to read it straight away.

Suburb is a hard book to label genre-wise. It’s almost New Adult fiction but also a coming of age story about finding yourself and also has elements of a rom-com in it. Suburb tells the story of Tom, a uni graduate who has just moved back home, who wants to start saving enough to go travelling. When Tom arrives back at home, he has to settle back into family life and finds the transition from independent adult to part of a family unit hard to deal with. Then he meets neighbour Kate, ten years older than him and married. What follows is a plot full of moral questions, difficult realities and the realisation that growing up is not easy.

I have to say, when I started reading, I wasn’t expecting much. That sounds like an awful thing to say but I wasn’t sure 260 pages would be enough to tell a story properly and get me involved in the characters’ lives. However, like always, I needn’t have worried for Steven does a brilliant job of telling this story. The plot is very well planned and left me guessing right until the very end, the characters were really well formed and every single one developed very well over the course of the novel, and the pacing was brilliant.

Steven has a great writing style – he pulls you into the world of the characters and doesn’t let you go easily which meant I devoured this book in just two sittings. He also deals with some interesting issues throughout the plot: adultery, drugs, sex, first love but manages to deal with them sensibly and compassionately. I have to say I always love a book that contains an affair, something about them just compels me to read, and I found that aspect of this book my favourite.

The one thing that struck me most about this book though is that people that will be able to relate to it. Growing up, going to uni, trying to work out what to do with your life…something nearly everyone has experienced in their life and something that will attract readers to this book. It was almost reassuring to read a book about someone who is similar in age to me that has the same worries about not being able to find their place in the world and worries that they’re never going to become something and I think that was what I enjoyed about this book most.

There were a few grammatical errors here and there and the occasional missing comma but these little mistakes weren’t big enough to detract from my overall enjoyment of the book.

A  strong debut about growing up, figuring out who you are and learning from your mistakes.