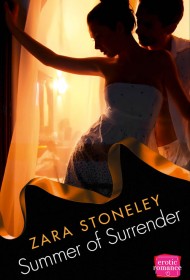 I have to say, Harper Impulse have acquired some of the most fantastic novellas.

Summer of Surrender is about Kezia. She is a free bird and has been traveling with no direction until she meets Maria who offers her a job at her stables. Kezia heads to the stables but the only person staying there over the summer is James, who is in charge of the place whilst everyone else is on holiday. At first, James is frustrated and pissed off, he doesn’t want a clumsy, talkative woman staying with him; he wants peace and quiet. But rather quickly, the chemistry between them becomes apparent and soon the summer of silence soon becomes a summer of sex, secrets and total surrender.

Wow, wow, wow. If you want a book that is better than 50 Shades then this is it. It has incredibly well written sex scenes (sorry, naughty bits), a chemistry between two characters that is palpable and a storyline that is engaging, addictive and intriguing. It is refreshing to read a book about sex that isn’t just based around a mutual need. This was based around a genuine feeling and passion the two had for each other which made this all the more emotional. I felt the love the two had for each other oozing from the pages and I wanted to be Kezia and have someone like James in my life!

With it only being about 140 pages, it could have been difficult for Zara to really have some major plot and character developments throughout but she managed it. There was Kezia’s secret that kept me reading and was very well revealed. I loved the fact there were only a few characters, it felt so intimate and incredibly involving when the majority of the action was between the two main characters. Kezia and James both undergo massive changes in their attitude towards life and each other and that was wonderful to see.

As always, with a book like this, I suggest you read with caution! The sex scenes are graphic (to me, not a problem) but could potentially be offensive if this isn’t the normal sort of book you go for! I really cannot fault Zara’s writing and I am eagerly anticipating her next work.

Thank you to Harper Impulse too for being such awesome publishers and giving me the chance to be part of their Romance Revolution!

A sexy, special, secretive story that will have you smiling and blushing in equal measure.