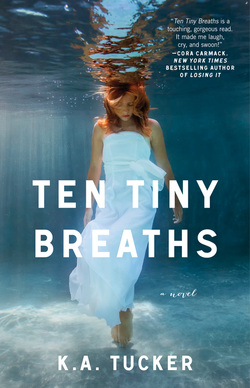 
Do you ever have those books that you see EVERYWHERE and EVERYONE is talking about them but you never actually remember to read them? This is one of those books. I’ve seen so many people tweeting, blogging and talking about Ten Tiny Breaths but I kept forgetting to read it until I found it in my local library.

This is the situation Kacey Cleary finds herself in. Luckily, her younger sister Livie wasn’t in the car at the time of the accident so she still has one family member to cling onto. The two girls live with their Aunty and Uncle but when their uncle oversteps the mark, Kacey and Livie flee with just two bus tickets and a destination of Miami.

When they arrive in Miami, they rent a small apartment from a grumpy landlord and meet their wild next door neighbour Storm and her daughter Mia. Kacey is content working at the local Starbucks and dreams of earning enough money to help support her sister through college but when bad boy Trent turns up and moves in next door, she realises she got more than she bargained for and soon she finds herself shedding her tough exterior. Can she slowly move on from her past and make a new life for herself or will the past always be there to haunt her?

I read this book in one sitting, it was that addictive and compelling that I couldn’t put it down. It’s not a long book, only around 250 pages so it was a really quick read. The pace was perfect and kept me firmly attached to the book, wanting to know what would happen next. Normally, I find long chapters a challenge, but even though this book had some chunky chapters, it didn’t even bother me one bit! (That’s a sign of a good book!!)

I adored Kacey as a character, even though I don’t think I would have got on with her in the real world, I loved how strong and resilient she was. Although the reason for her being like that wasn’t pleasant, she’d set up strong walls around her so she could never be hurt again. She was fiercely protective over her sister which was a trait I admired and I loved her courage. Her development over the course of the book was stunning: she went from being harsh and unwelcoming to being the exact opposite, friendly and fragile.

Storm, Kacey’s next door neighbour, and her daughter Mia were such fantastic additions to the plot. They both brought with them new layers and elements to Kacey’s story that made it that bit better. I loved how Storm and Kacey formed such a brilliant bond and how beautiful little Mia was Livie’s saving grace. Trent was a totally delicious character and he had me hanging on his every word!

The plot was incredibly strong and even though I managed to predict where it would end up, it didn’t stop me loving it one little bit! The writing was moving and descriptive and conveyed a whole heap of emotion.

I believe that this is the first book in a series of four and they all follow a handful of characters from this book. I cannot wait to read them because I am sure they will be just as addictive as this one.

A YA novel about what it’s like to have loved and to have lost and how sometimes forgiveness can be the key to opening up the future and leaving the past behind.