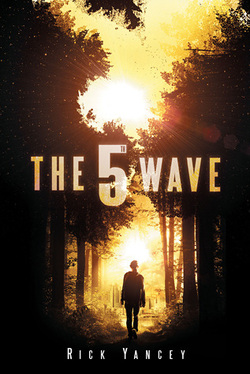 The 5th Wave grips you from the very first page and holds you captivated until the very last. This novel is told through a handful of viewpoints; however, perhaps the most important of these is Cassie. We are embroiled in her nightmare first and learn why she is stranded, alone and relentlessly protecting her life. As we read, we understand some kind of alien invasion has taken place killing a huge proportion of the human population in ‘waves’ (hence the apt title). Cassie’s viewpoint gives us a glance into previous events and we begin to piece together what has happened and why she is hell bent on surviving.

Two other narratives run parallel to Cassie’s and, whilst at first they seem to be paving the way to their own conclusions, it becomes apparent, as the narrative continues, that these viewpoints have the potential to merge and climax in succession. I will refrain from discussing these two other narratives as it could potentially ruin a lot of the tension!

We follow Cassie and others on differing journeys as they all strive toward two core goals: survival and love. As the novel intensifies and each character faces a unique set of challenges, we begin to see the true force of human nature and the inbuilt need we have for survival.

Yancey has written a book that perhaps contradicts everything I’ve ever assumed about science fiction before. Not only is this book understandable and cleverly plotted, it also has so many themes intricately weaved through it. Themes of loss, death, suffering, human nature, power, group behaviour, conformity, love…the list continues. This isn’t a normal ‘alien invasion’ book; it is also a coming of age tale set against a bleak backdrop where one teenage girl has to grow up remarkably quickly. Cassie’s narrative voice was just outstandingly realistic and I still find it hard to believe that a male writer has so expertly captured the thoughts and feelings of a teenage girl in the way he has.

The pacing of this novel was on point, each page more compelling than the last, forcing you to stay up late into the night just get to the end of the next chapter.  Yancey’s lexicon was in places perhaps a little mature for a YA audience, nevertheless, the emotion that he managed to create and the tension fuelled descriptions were more than enough to keep me reading. I think the strongest point of this novel was the way it managed to make me feel, as a reader. I constantly felt on edge and wasn’t willing to relax at any moment, almost expecting a fight to ensue and for me to be ready to battle. I imagined myself so strongly in Cassie’s shoes that I went through her wide array of emotions at the same time she did. I felt panicked, despairing and at one point I even punched a pillow because I was so angry with what had happened…not many books manage to rile me to that extent!

The 5th Wave also raised so many questions as I read: what would I do in Cassie’s situation? Would humans really become so brutal and unrepentant? Would life turn into a lonely fought battle, each man for himself? Would you conform to the group or step aside and make your voice heard?

One of the only negative points I could perhaps say about this book is that in a couple of places it felt almost rushed, especially towards the end, and it felt as though resolutions were easily come across without much explanation. However, I was incredibly impressed and excited by the outcome of this novel and wait extremely impatiently for the next one called The Infinite Sea.

A must read for all sci-fi fans and book lovers alike. A fast paced, tension filled ride through a world that is rapidly falling apart.