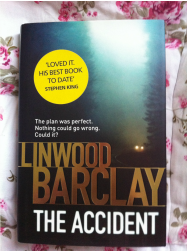 As I was so excited about the release of Linwood Barclay’s new book, I decided to return to his most recent one. As I am quite a prolific reader, I often forget the details of some plots, and unfortunately I couldn’t remember a lot of what had happened in this one. But as I was reading this for the second time I was immensely glad that I couldn’t remember the plot as it was such an amazing book to read all over again.
I don’t quite know how Linwood does it; the story, unlike many other thrillers I have read, flows with such pace. There is a huge amount of anticipation and some of the most unpredictable twists and turns. With this book you think you have worked it all out, but no! Of course you haven’t, there’s always a final twist that you wouldn’t have ever predicted.

Every page brings a new twist to the story and you are constantly trying to second guess what is going to happen. Multiple times I was convinced I knew what was happening but suddenly everything changes and you then have to try and work it all out again! I also love how in this book, the most subtle things, the things that you think are irrelevant, actually turn out to be some of the most important.
Linwood is just a pure literary genius. He has the remarkable power to control the reader and prevent them from working out the ending. I cannot imagine anybody would have been able to predict the ending to this book.
I don’t want to ruin a single plot detail by trying to summarise so I will give a little summary of the beginning.
Glen Garber is waiting for his wife Shelia to return home from her evening accounting course. Normally it takes her about half an hour to return if she leaves straight after it finishes. However tonight she is already an hour late home. Glen is getting worried but then tries to rationalise the situation by assuming she had a coffee with friends afterwards or there was some heavy traffic. But if she is doing either of these things why isn’t she picking up her phone? Maybe it’s right at the bottom of her bag. Yes that’s it, she just can’t hear her phone.
It doesn’t take long before he becomes restless and, after phoning Shelia’s mum who Shelia was supposed to have visited before her course, but didn’t, gets his daughter Kelly into the car and begins to drive the route to try and find her.
What he doesn’t expect to come across is a serious car crash. What he really doesn’t expect to find is his wife’s car involved in the crash. What he really doesn’t want to believe is that his wife caused the crash. She was drunk and fell asleep at the wheel, causing not only her death but two others. But wait, Shelia doesn’t drink that much. Why would she be drunk, why would she be drunk after her course, why would she be drunk and drive? Glen is angry. Why would she do this?

What follows is an absolute blinder of a plot.
Please, please read this!!