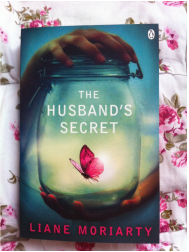 This is a book that I will re-read over and over again.

I absolutely adored this novel and I cannot recommend it enough!

Now, I don’t want to give much of an overview of the plot because it will ruin it and I do not want to do that at all.

Three women, Rachel, Cecelia and Tess don’t know how powerful a secret can really be. When Cecelia finds a letter from her husband only to be opened in the event of his death, she battles with herself to decide whether to open it or not. Tess finds out that her husband might not be actually telling her the truth about some things…and Rachel thought the memories of her past were just memories but they might turn out to be a whole lot more than that.

The novel is set over one week, beginning on Monday and ending on Easter Sunday that deals with a number of issues so well. The twists in the plot and the cleverly crafted clues are sublime and will have you guessing right until the end. The epilogue is perhaps the most powerful part of this novel and will shock you and leave you open mouthed. I even read it three times because it was just so powerful.

I have never read anything by Liane before but am definitely going to be looking out for her future novels because if this is anything to go by then I am seriously going to love her next novels. It is hard to shelve this book into a certain genre. It has elements of chick-lit, thriller and mystery but they all weave so well into each other that it almost has it’s own individual genre.

The writing is just excellent and the three main protagonists are incredibly well planned and written. As I was reading I couldn’t help but fall in love with all three women and wonder what I would do if I was in their situation. Each action and thought they have fits directly in with the plot and isn’t just used to fill up the narrative which nicely created an extra layer of tension and intrigue. The other characters were just as well written and I was left questioning who I should trust.

The main aspect of this novel that I loved was the exploration of the idea of ‘choice’ and what we do when our choice is taken away from us. How do we accept a secret that we have no control over and have no idea how it will shape our future? The notion of the butterfly effect was also explored; how one small event can escalate and turn into something that affects many people for the rest of their lives.

Fast paced and a definite page turner, this book will leave you with chills down your spine and have you questioning whether secrets are always best kept hidden.