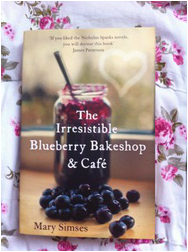 I am thrilled to be a part of this blog tour and was excited when the gorgeous book arrived through my letterbox. The cover is divine and alludes to the treasures that lie within these pages.

Ellen’s distraught after losing her grandmother but is determined to carry out her last wish and deliver a letter to the man she once loved. Ellen has a doting fiancé who allows her to travel to the little town of Beacon by herself but expects her to return within a few days. What Ellen doesn’t count on is how her life is about to be turned upside down and how one chance encounter will lead her to discover things about her past and make plans for her future and she may be sticking around in Beacon for longer than she planned…

I was engrossed from the first page of this delicious novel. Mary’s writing is captivating, lyrical and leaves you wanting to read more. Her descriptions are perfect and leave you with a desire to be sat in the sun surrounded by blueberry bushes. The characters are lovingly crafted; especially Ellen. There were characters throughout the novel that I found it hard to warm to, Paula the hotel owner and Hayden, Ellen’s fiancé. However, I think, Mary probably wanted us to find them slightly intolerable.

The front of this book described it as a book for fans of Nicholas Sparks and I must say this book was incredibly reminiscent of The Notebook. From some aspects of the novel for example, painting, unopened letters, love triangles, rich vs. poor, a mother trying to convince her daughter to do the right thing, etc it was almost like it was a ‘re-telling’ of The Notebook just set in a different era and geographical location. Fair enough, the plot was different enough but it was a similar idea which was a little frustrating at times. I could easily predict where the narrative would end up and I was able to work out some smaller parts of the plot before they actually happened so it took away a little of the mystery and intrigue about what was going to happen. However, saying that, I did thoroughly enjoy this book and would recommend it to any fan of The Notebook or Nicholas Sparks and perhaps anyone that loves Cecelia Ahern.

It was an addictive read that I devoured in nearly one sitting and found difficult to put down. I was desperate to race to the end to confirm that what I thought and hoped would happen, actually happened!

A tale of love, loss, laughter and of course, blueberries!