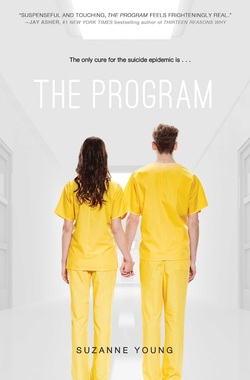 The Program is a stunning book. After hearing about it through BookTube and reading the blurb, I knew I just HAD to read this book.

The Program tells the story of Sloane and her boyfriend James. In a dystopian society, suicide has become a pandemic for under-eighteens and if any teenager is ‘flagged’ as being depressed then they are taken into The Program. The aim of The Program is to ‘fix’ the teenagers and remove the depression but by doing so, they also remove the teenagers memories. Sloane and James are madly in love but with people committing suicide all around them and Sloane finding it hard to cope after her brother’s death, they have to pretend to be ok – plastering smiles on their faces and acting as normal as possible. But, behind closed doors they are both falling apart. Depression is taking hold. No one wants to be put into The Program but especially not these two for when they are ‘fixed’ neither of them will remember each other. Their relationship will be over. With James’ promises to protect Sloane and Sloane’s insistence that she’s ok, what will happen to the two teenagers?

Young is a genius for a myriad of reasons. The first is the plot. The Program is such an original and unique idea that you cannot even begin to predict what will happen, the kind of characters you’ll meet and the way the story will turn which leads onto the second point which is the pace. This book is paced perfectly, every chapter ending makes you want to read the next one, and then the next one. It’s addictive! Next, Young’s characters are just phenomenal – Sloane was the most incredible, relatable and competent protagonist and the other characters she interacts with were so well written. There were characters we were supposed to dislike and the anger and frustration I felt towards those characters was palpable.

Character development in this book is fantastic. Sloane, James and a handful of other characters we meet on their journey develop well over the course of the novel but Sloane perhaps develops the most and I was amazed by her journey. She was such a strong, feisty character and I admired her strength and courage but also felt anger and injustice on her behalf. I got so sucked into this book and so immersed in the pages that I had some serious emotional reactions to what was going on!

The book is divided into three sections (I can’t tell you what they are as they might be spoilers!) but I found the division of the book into three separate parts to be really effective and helped to focus on the stage of life Sloane was at. The twists and turns this plot takes were really well written and there were multiple times that I had to stop reading and just digest what was happening, sitting there open mouthed! The ending to this book was such a shock and a huge cliff-hanger that I am desperately waiting for the second book to be published. The Treatment will the sequel and, sadly, the final book. I could happily read about Sloane forever!

From the blurb of The Treatment it sounds like we are in for an adrenalin fueled ride with Sloane as she navigates the next part of her hellish adventure and I cannot wait to re-join her very, very soon.

The Program is a MUST READ novel full of drama, tension and intrigue. Not one to be missed.