The Right Side Of Mr Wrong - Jane Linfoot 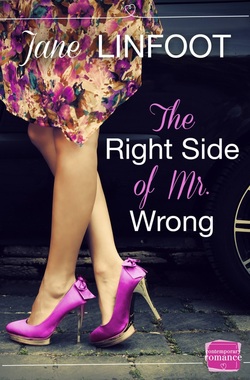 The Right Side Of Mr Wrong is Jane's second novel and after seeing the gorgeous cover I was itching to read it! (Can I have a pair of legs like that please?)

Meet Shea: a woman who wants to try and get over the awful things in her life. Meet Brando: (a really really really hot man) troubled by things in his own past. What happens when the two of them meet, each thinking they are meeting under different circumstances? Well, I tell you what...a LOT happens!

The Right Side Of Mr Wrong is a sort of chick lit laced with erotica! It's certainly got the perfect chick-lit components but it is also a little steamier than your average chick-lit. I really enjoyed this merging of genres and thought the balance was brilliant; there wasn't too much sex, but there wasn't too little of it...it was just right!

Jane has written a pretty gorgeous character in the form of Brando. *Fans self* I did find him to be incredibly attractive and even though he was a bit of an arse at times I still couldn't help but love him quite a lot! Shea was the perfect female equivalent to Brando and gave as good as she got which meant there were some perfectly written scenes with each of them bouncing insults and sarcasm at each other (always really great to read). The weren't too many other characters that we got to know well...but that didn't matter to me that much...I liked being so trapped in the tension between the two main characters.

This book was quite short, in the sense it wasn't full novel length, which I'm not sure is a good thing or not! I really liked how the story was told but equally I would have loved to have known more about both characters' pasts a little more. The plot was also predictable, but, hey! Show me a chick-lit book that isn't! I really liked the route it took, one that was a little different from where I had imagined it would.

Jane has a great writing style that was shown off perfectly in this book. Whilst we saw things from both characters perspectives, she managed to keep a really smooth style and transition throughout which I was really impressed by. Her descriptions are really well developed and meant I could easily in envisage what was going on.


This is a fun, quick read that will have you wishing you could be in Shea's shoes!