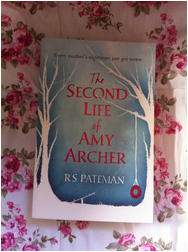 I was super excited when the lovely Jemima from Orion contacted me asking if I would like to review this book. I LOVE a psychological thriller and this one was said to be for fans of Before I Go To Sleep and I thoroughly enjoyed that book so hoped this one would be just as good.

In 1999 a ten year old girl called Amy is playing on the swings with her friend Dana. That is the last time she is seen. She vanished without a trace. Her body has never been found. What really happened to Amy Archer?

Fast forward ten years later to the tenth anniversary of her disappearance. Her mother Beth is still caught up in the pain and anger of what happened and is struggling to live a normal life. Every year, once a year she visits a psychic to see if she can find anything out about what really happened. They have never been any help, but this year it’s all about to change. When the new psychic Ian tells her that the letter ‘E’ is going to have a big impact on her life she disregards it. After all her daughter was called Amy; not an ‘e’ in sight. However, when a woman knocks on the door claiming to know where Amy is Beth is overwhelmed. She can finally hold her daughter in her arms again and do all the things a mother should. She’s missed out on ten years of her life but now she can see her 20 year old daughter and make plans for a future together. But that’s not quite how it turns out. Esme is a young girl, ten years old to be exact who claims she is Amy. Beth is horrified; Why are these people playing a cruel trick on her? But wait a minute, how does Esme know things that only Amy would have known? Does Esme hold the key to finding out what happened to Amy?

This was such an interesting and addictive book. It was stuffed to the brim with ideas about psychics, life after death, reincarnation, murder, paedophiles etc etc. It was incredibly fast paced and I found it hard to put down. The main character Beth was extremely interesting but over the course of the book I kept wondering whether to trust her or not which kept me on edge the whole time! The premise is a unique one and is unlike anything I have ever read before. R S Pateman really knows how to keep the reader involved and interested in the story and his writing is near perfection.

There are two things that I would have perhaps changed about the book (but they’re not big things!) The first is that the chapter length could have been a little shorter. There were some hefty 60 page chapters in there (if you know me then you know I have a thing for chapter lengths!) It would have perhaps been nice to have some shorter chapters with more cliffhangers so you felt even more on edge! The second was the ending. I love an ending that ties everything up neatly and this one didn’t do that! It was extremely ambiguous which left me sitting for ages trying to work out what I felt had happened. This is not necessarily a bad thing, it is just it was an abrupt ending and I would loved to have known what happened to the characters. Perhaps and epilogue would have been good.

Overall this is a stunning debut and I am excited about other books RS Pateman may have up his sleeve! If you enjoyed Before I Go To Sleep, Until You’re Mine or Close My Eyes then you will enjoy this one too. It is a fast paced psychological thriller which will have you questioning your beliefs about everything!!