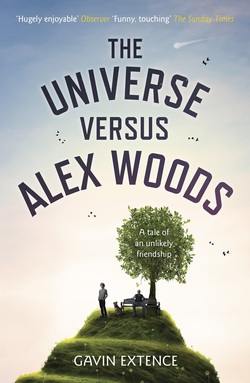 The cover for this book had me intrigued for months after I had seen it but I had never really found myself committed to buying it. Even when it was chosen as a Richard and Judy book club title, I still wasn’t sure how I’d find it. However, the choice was made for me over Christmas when it was reduced to 99p in the Kindle sale: I couldn’t miss an offer like that!

I downloaded it straight away and thought I’d read the first chapter to just ‘get a feel’ for the book. Amazingly, the first chapter turned into the second chapter and then into the third and I had already read 20% of the book in one go. I was addicted and I couldn’t put it down.

Alex Woods is an ordinary boy, well; he was until a meteorite hit him on the head whilst he was in the bathroom. Now suffering from epilepsy, caused by the unfortunate accident, he now finds some of the simplest tasks difficult and to add insult to injury, he still gets bullied at school. One afternoon on the way home from school, he is attacked by two bullies and ends up running away from them, only to end up in someone’s shed. It just so happens to be the shed of one Mr Peterson. As a punishment for ruining Mr Petersons shed and for breaking and entering, Alex’s mum makes him visit Mr Peterson regularly and help out with any chores or errands Mr Peterson needs doing. Mr Peterson, being an elderly gentleman who enjoys his own company, isn’t happy to have a young teenage boy popping round to his house every afternoon, but, after a while, the two of them start to form a friendship which blossoms into an unbreakable bond which subsequently leads to them both making a life changing decision.

I don’t think I can do this book justice. I honestly cannot begin to tell you how incredible this book was and how quickly I fell in love with the characters and plot. The beginning of the novel opens at the end; we meet Alex as he is attempting to cross the border from Dover to get back into England after taking a trip abroad: he is found to be in possession of a large quantity of illegal drugs, a dead passenger and he has just had an epileptic fit. Over the course of the book we go back in time to see the events that led to Alex’s current position. They are intriguing, emotional, funny and incredible events that lead up to the climax of this novel and I found myself going through such a plethora of emotions.

The characters in this novel are easy to love and from the second I met Alex, I knew I could put my trust in him as a narrator. The introduction of Mr Peterson was interesting and I found myself untrusting of him to begin with, but, like Alex, I found myself warming to him very quickly. Alex’s mum was a difficult character to get along with: she was very set in her ways and at times I found her to be a little suffocating but I still enjoyed reading about her. The other minor characters were all well-crafted and well loved, especially Alex’s epilepsy doctor.

There was perfect pacing to this novel; everything seemed to flow very seamlessly and easily together and I constantly wanted to keep reading to know what was next. There was no point in this novel when I got bored or wondered about the relevance of anything that was going on which was pretty impressive. I cannot even begin to tell you how much I loved it! Gavin Extence has written an absolute gem of a book and I am so eager to see what will come from his pen next. I can only hope it is half as good as The Universe Verses Alex Woods.

A brilliantly moving story about an unlikely friendship and the things we sacrifice for other peoples happiness.