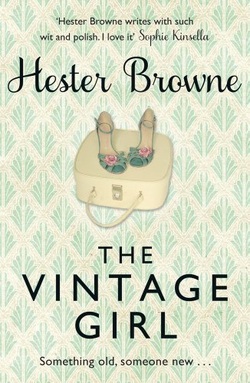 Hester Browne is not an author I’ve read before so I was excited to get started on her latest novel. Not being a huge vintage lover myself, but growing up in a house filled with vintage objects, I felt right at home with Evie and her story.

Evie works in a London antique shop run by restless owner Max. With Evie’s penchant for items of emotional significance rather than of value, Max is exhausted with making loss after loss. When Evie is offered the chance to visit Kettlesheer Castle in Scotland to value the family antiques, she jumps at the chance, fully expecting to live out her Austen day dream of sweeping grounds and tight corsets. When she arrives, a chain of events occur leaving her attending the annual ball in her sister’s place. With a complicated, traditional dance to learn, antiques to discover and a crush on her sister’s boyfriend, can Evie make it through the ball without any problems?

Evie was a character I very quickly warmed too, however on occasions it didn’t feel like she was particularly mature: some of her inner thoughts were a little childish at times. Aside from that small issue, I really loved seeing the story through her eyes and being privy to her feelings about the characters. Robert, one of the men Evie meets in Scotland, was a bit of a troubled soul and spent the beginning of the book making me feel quite frustrated but luckily over the course of the novel his character developed and he ended up being my favourite character of them all.

The plot was devoid of twists and turns: it was very predictable and at times lacked a little pace. I would have loved to have learnt more about the history of the castle and perhaps a little more about the surrounding area. There were superfluous descriptions of a dance that the characters had to learn for the ball and after a while it felt slightly tedious. It didn’t particularly add anything extra to the story which was a shame.

Hester’s writing style is very witty and has a fair few laughs along the way. She paints the characters well in most cases and a lot of the descriptions of Scotland and the castle had me longing to be there too. It would have been lovely to have had more ‘things’ going on in the plot rather than just a few events being described in such depth - sometimes less really isn’t more. I would have loved, as mentioned before, a little more background to the castle and it would have been nice to have a few scenes away from the castle grounds too.

Despite this, The Vintage Girl is a quick, romantic read that will leave you wishing you could be in the Scottish countryside and have an invitation to a ball!