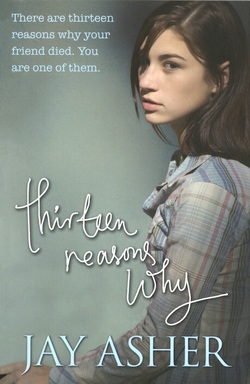 On turning the final page of this book, I logged onto goodreads and gave it 5 stars. However since then I have read some other reviews and thought long and hard about the rating this book deserves. Does it fit in with all the other 5 star books I’ve read? Is it really good enough to be up there with them?

I don’t know. I hope I will by the end of this review!

Thirteen Reasons Why has the most haunting premise which was what drew me to the book in the first place. A teenage girl has committed suicide, but before she died she recorded a set of tapes detailing thirteen people that were the reasons why she killed herself. One afternoon, Clay returns home from school to find a box on his doorstep. He goes into his bedroom and opens it up to find a set of seven cassette tapes with numbers written on the top corner of each one. He goes into the garage and finds an old casstte player and starts the first tape. He hears the voice of Hannah Baker, the girl who killed herself and he works out that he is one of the thirteen people responsible. Clay is haunted by the thought that he did something wrong and so listens to the A side and B side of all 7 tapes that night, walking around his local area, going to all the places Hannah talks about in the tapes. Clay has strict instructions to pass on the set of tapes to the next person on the list and if he doesn’t then all of the tapes will be leaked. He either faces the fact that he and twelve other people did something wrong or he lets the whole world know that Hannah Baker killed herself for thirteen different reasons.

Reading threads on Goodreads really angered me in some places. Suicide is a very serious and very important topic to discuss and I didn’t like the way people were suggesting Hannah ‘didn’t need to commit suicide’. It seems they were taking each event as a standalone and didn’t seem to understand the snowball effect that was even mentioned in the book. It wasn’t just a handful of isolated events that led up to it, it was a number of events that followed on from each other, each one making Hannah more desperate and lonely.

Then people suggest that Hannah was too cheerful and upbeat as a character. If I’m honest, if she was about to commit suicide and knew there was a way out of her life then I would imagine she would be momentarily happy as she told every person why they were the cause of some of her pain. This would be her last ‘hurrah’ as it were, her last chance to tell people how she feels.

Lastly, there were also people suggesting that Jay Asher was almost encouraging people to commit suicide when things get too rough. Almost as if he’s saying ‘having a hard time in high school? Don’t worry just kill yourself.’ NO. That is not what this book is trying to say at all. This book is saying the EXACT OPPOSITE. It is saying: look out for others, notice signs of people being bullied, care about people, think twice before you make a nasty remark etc etc. This book, as proved by the ending too is trying to make us all BETTER people. Not, as some have suggested, highlighting suicide as an easy way out.

Anyway, enough of me getting on my high horse about that…

Onto the writing in this novel…

I loved Jay’s writing. I thought it was lyrical, unique and had me desperate to read on. I also don’t know whether I agree with others when they mentioned the dual narration. This book is a little hard to follow to start with: there is Clay’s voice and his thoughts in normal font but then Hannah’s voice on the tapes is in italics and they cross over rapidly and often. It was confusing to start with and I kept having to re-read bits to make sure I was listening to the right voice in my head but after a while it became second nature to me and I didn’t even really have to think about who was talking, it just seemed to flow brilliantly.

Clay’s story began and finished on the same day and it was really quite a suffocating experience to be so up close and caught up in his feelings. I thought the ending was perfect and left me hanging on to Clay’s world for a little bit longer and analysing everything that had happened and what the message of this book was.

I think that this book was really fantastic but I find it hard to see so many people who have seen a different side to it and seem to have interpreted it in a different way. Should that have happened if it was written perfectly and had exactly the right tone or should it be open to interpretation and discussed, isn’t that what books are supposed to do?

I think I will have to give this book 4 stars. I think it is just a little too ambiguous to be 5 stars but it definitely deserves to be read and for you to form your own opinion of it.