This Child Of Mine - Sinead Moriarty 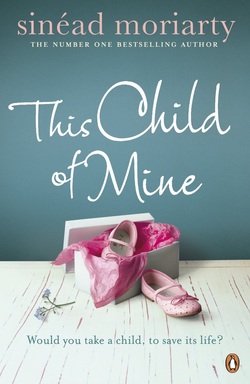 I have never read anything by Sinead Moriarty before so was incredibly excited to pick up this novel. I was told to read it by one of my blogging friends, Victoria, as she had been really enjoying it and wanted me to enjoy it too!

This Child Of Mine is a complex story involving two different time periods and thee very different but very important women. Sophie is a teenager who has been bought up by her mum Anna and has never really known much about her childhood or her father. She also has synaesthesia and when watching a news article one day, spots and artist called Laura who is the spitting image of Sophie and also has synaesthesia which is passed from mother to child.

Laura gave birth to a daughter called Jody but on one fateful day when she was passed out drunk on a ferry, Jody reportedly drowned and Laura can’t fight the feeling that Jody might still actually be alive.  When she gets an email from a girl claiming to be Jody, she starts to believe that dreams really do come true.

Anna has never had the chance to have a baby of her own and after a miscarriage which led to a hysterectomy, Anna breaks up with her husband and goes to start a new life. On the ferry, on the way to her new life she sees a young girl being abused by her drunken mother. What Anna does next, will haunt her for the rest of her life.

This was a really interesting concept for a novel and the first third of the book had me totally hooked but then as the story went on, I felt a little cheated because nothing much really seemed to happen that was exciting. It was all a little predictable and I got a little bored of hearing the same events through three different characters eyes. It was nice to see so many viewpoints but sometimes I just wanted to skip to the next part of action! I also found some of the behaviour of characters a little unbelievable. I wasn’t sure characters could change their viewpoints so drastically in such a short space of time but I liked the way they did change to suit the outcome of the book.

Sinead’s writing is captivating and has you drawn in from the second you start reading and, whilst at times the pace of the book was rather slow, I did find myself immersed in the character’s worlds and was reluctant to give up. Sinead has a unique gift in character description and it was incredibly helpful to have such rich and vivid descriptions of the characters I was reading about. At times I found it hard to side with certain characters because I didn’t like their behaviour and it was odd to see the narrative lean towards favouring them when I didn’t agree!

However, for any of the faults I have pointed out within this review, I would have to say this book was definitely worth reading and I am glad I did. I am definitely going to be keeping an eye out for more by Sinead.

A novel that will pull at your heartstrings and have you questioning what you would do in the same situation.