To Family, At Christmas by Jennifer Joyce 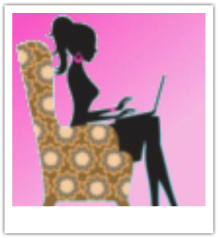 Jennifer is a house-work dodging mum of two from Manchester who adores reading and writing chick-lit. She runs the beautiful Jennifer Joyce Writes blog where she shares book reviews, short stories and her own books.
You can find Jennifer on Twitter and Facebook.
Jennifer has written a really funny piece of Christmas Flash Fiction all about Christmas day with the in-laws. I hope you all enjoy it as much as I did!
With a glass of champagne in hand – bought by the in-laws, a fact we had been reminded of several thousand times since their arrival at eight-thirty that morning – and fake smile plastered on my face, I proposed a toast.

‘To family, at Christmas.’

Most of the family gave a hearty cheer. Most of the family appreciated my sentiment, however short. It was enough for most, but not for the mother-in-law. Mary pursed her lips, creating an intricate map of wrinkles across her leathery face.

‘How lovely, Eve.’ Mary attempted a smile. It didn’t suit her. ‘George? Why don’t you say a few words?’ She cocked an eyebrow at me, clearly letting me know that a “few” words weren’t adequate.

‘Oh.’ George looked taken aback by his mother’s request. My husband hadn’t been expecting to make a speech. We weren’t that sort of family. ‘Ok then.’ He shot me a look but I simply shrugged my shoulders. Mary was his mother and he’d invited his parents over when their holiday plans fell through at the last minute. ‘Thank you all for coming today. It’s lovely to see you.’ He gave a nod of his head and took a sip of his champagne but Mary wasn’t satisfied. ‘Merry Christmas?’

Mary gave a tut. It seemed George had been found lacking too. ‘I’d like to thank you for welcoming your father and me into your home on such a special day. We really do appreciate your hospitality.’ Mary pursed her lips at me. Alright, alright! So I’d forgotten to lay towels out on the guest bed and placing a vase of fresh flowers on the bedside table hadn’t even occurred to me. ‘It’s so wonderful for me and Clarence to see the children on Christmas Day. We don’t usually get the opportunity, which is what makes it so special.’ Mary aimed a warm, grandmotherly smile at Holly and Bailey, neglecting to point out that this was the first Christmas they’d spent with her because she and Clarence were usually cruising around the Caribbean at this time of year. Not that the kids seemed to care what was coming out of their grandmother’s mouth. Holly was preoccupied with her new mobile phone, under the illusion that I couldn’t see her tapping away at it under the table, while Bailey was taking sneaky bites of his turkey.

‘Thank you, Eve, for cooking this meal for us all. It looks splendid.’ My eyes widened at Mary’s words. Had that been a compliment? ‘Although, I would have let the potatoes crisp up a little more myself. But never mind. It’s the thought that counts.’ I was thinking about jabbing her with my fork. Did that thought count? ‘And to our darling George. We are so proud of you. We hope you realise that.’

‘Thanks, Mum.’ George raised his glass before attempting to start eating but Mary hadn’t finished.

‘And finally, thank you to Clarence for buying this delicious champagne for us all to enjoy.’

I wanted to roll my eyes, but managed to keep them still in their sockets while I forced another smile at the in-laws. ‘Thank you, Clarence. It really is delicious.’

‘Can I have some champagne?’ Holly’s ears must have pricked up at the mention of alcohol and her attention was temporarily dragged away from her phone.

‘Not a chance,’ I replied, my firm voice shutting off any arguments.

‘A little drop won’t hurt, will it?’ Mary had grabbed the bottle and was about to pour before George sprang into action, motivated by a swift boot to the ankle.

‘She is only thirteen, Mum.’

Mary paused, the tip of the bottle touching Holly’s outstretched glass. ‘Hmm, maybe you’re right. She is a little young.’ She returned the bottle to the table, swapping it for her cutlery. Were we finally permitted to eat? Bailey’s plate was already half empty, his jumper splattered with gravy, but the rest of us were ready to start nibbling the tablecloth. ‘Would anyone like a top up of Clarence’s champagne?’

‘Who’s stopping you?’ Mary gave a tut before tucking into her food. She chewed slowly before placing her cutlery down on her plate and dabbing at her mouth with a napkin. ‘I’m sorry, Eve, but I can’t eat this. It’s stone cold.’