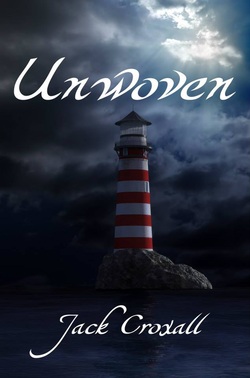 (Let's just take a moment to appreciate the beautiful cover.)

I've struggled for days to write this review. Mainly because I can't really find the words to explain how much I love Unwoven!
But I think I've just about managed it.

Unwoven begins eighteen months after Tethers and we are invited back into the world of Karl and Esther. Disappointingly, the pair seem to have gone their separate ways and are no longer talking (much to my despair). The story opens with Karl on his way to meet Mr Cauldwell and very soon we learn that the Viniculum is still very much a part of their lives.

When Mr Cauldwell shares a shocking piece of news with Karl, he rushes to talk to Esther about it and desperately tries to figure out why she's so upset with him but, very quickly, events happen that throw them back together leaving little time for an emotional reconciliation.
The pair set off on another adventure, this one full of danger, more sword fighting and a whole lot of betrayal.

So, it's no surprise I read this book in one very quick sitting. It landed in my inbox and I greedily read it; I was so desperate to be back with Karl and Esther.

I was ecstatic to be back in their world and the two teenagers fill me with such pride when I read about them, they are so fearless and driven by justice that I can't help but admire them immensely. Their relationship is a tricky one during this novel, they almost have to start again and put their past behind them but there are still so many unresolved feelings fizzing between the two. I love the chemistry between them and constantly wanted them to just have a quick kiss! I totally melted when Karl spoke about Esther in this book, especially when he is watching her in the candlelight. It gave me butterflies! Stunningly written.

We are introduced to some new characters in Unwoven and they were really well introduced and developed nicely throughout. I always like the way Jack introduces new characters, I always feel like I need to be a little wary of them to begin with instead of trusting them straight away.

The plot was full of twists and turns, I kept having to take deep breaths before reading certain pages. I was fearful of what would happen next. I love books that grip onto me so tightly and immerse me in their world that I can’t help but act a little bit crazy when I read them! I would LOVE to discuss the plot in more detail but I totally can’t without spoiling it so I have to stop here before I give it all away! (But just know there are some AWESOME scenes and some jaw-dropping moments!)

As always, Jack writes beautifully, using the most lyrical of descriptions that are honestly the best I’ve ever read. Every sentence flows seamlessly into the next and, to me, encapsulates the Victoria era perfectly. I so desperately want to jump into the pages of the book and run around with Karl and Esther, whipping out a sword and having a few fights!

This book ends on a complete cliff hanger that had me genuinely hyperventilating, completely shocked by what had happened. I could NEVER have predicted it was coming! It has left me desperate for the third book: Torn. Hurry up and write it Jack!!

I can’t really write much more about this book without being too much of a fan-girl and declaring how much I want to squeeze Jack and how much I love him so I think I will stop before we get into fan-girl territory!

All I have to say is READ THIS BOOK. (After reading Tethers.)